We Are All His Creatures: Tales of P. T. Barnum, the Greatest Showman (Hardcover) 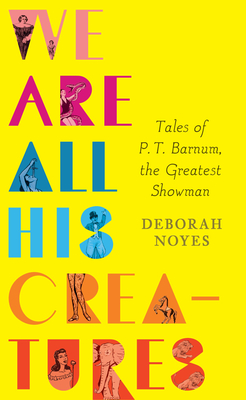 We Are All His Creatures: Tales of P. T. Barnum, the Greatest Showman (Hardcover)


In Stock—Click for Locations
In a series of interwoven fictionalized stories, Deborah Noyes gives voice to the marginalized women in P. T. Barnum’s family — and the talented entertainers he built his entertainment empire on.

Much has been written about P. T. Barnum — legendary showman, entrepreneur, marketing genius, and one of the most famous nineteenth-century personalities. For those who lived in Barnum’s shadow, however, life was complex. P. T. Barnum’s two families — his family at home, including his two wives and his daughters, and his family at work, including Little People, a giantess, an opera singer, and many sideshow entertainers — suffered greatly from his cruelty and exploitation. Yet, at the same time, some of his performers, such as General Tom Thumb (Charles Stratton), became wealthy celebrities who were admired and feted by presidents and royalty. In this collection of interlinked stories illustrated with archival photographs, Deborah Noyes digs deep into what is known about the people in Barnum’s orbit and imagines their personal lives, putting front and center the complicated joy and pain of what it meant to be one of Barnum’s “creatures.”
Deborah Noyes is the author of numerous books for children and adults, including the young adult short story collection The Ghosts of Kerfol and the young adult novel Plague in the Mirror. She lives in western Massachusetts.
In these eleven cumulative fictional short stories...Noyes focuses instead on those within the gravitational pull of his American Museum, and how the force that was Barnum affected the trajectory of their lives...Noyes indulges in her own touch of flim-flammery.
—Bulletin of the Center for Children's Books (starred review)

The author uses historical facts combined with her own imagination to show readers that while Barnum did make some of his exhibits rich and famous, deep down he was a shyster who preyed on a gullible population in the name of "entertainment."...with real photos and a historical facts included, this book may make a nice addition to larger public library collections.
—School Library Connection

Proceeding chronologically from 1842 to Barnum’s death in 1891, this collection of 11 intertwined stories from Noyes (Tooth & Claw) imagines the inner lives of real people from the Barnum family and business, with the ambitious, exploitative P.T. Barnum serving as a decentered fulcrum...these stories vividly engage with their period images (“her knuckles... were the color of new cream”), providing a picture of what life with Barnum might have been like: “We are all his creatures.”
—Publishers Weekly Online

An entertaining, absorbing look at the prominent figures in Barnum’s life that will appeal to his fans and history buffs in general. Recommended.
—School Library Journal