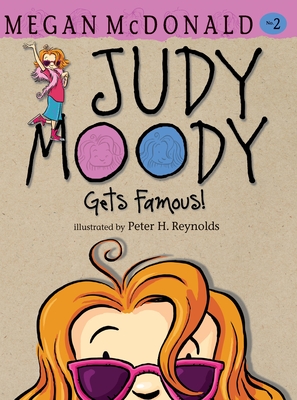 This is book number 2 in the Judy Moody series.

Good moods, bad moods, can't-stand-Jessica-Finch moods. Judy Moody is back with her many hilarious moods.

Fans of Judy Moody already know that Judy has a mood for every occasion—and this time Judy is in a jealous mood. Jealous of classmate Jessica Finch, that is, who gets her picture on the front page of the newspaper. When Judy sets off in pursuit of her own fame and happiness, watch out! She's so determined, she just might find it, or she might merely become more INFAMOUS than ever. This adventure is sure to put readers in a very Judy Moody mood!
Megan McDonald is the author of the award-winning Judy Moody series as well as a companion series starring Judy's brother, Stink. She is also the author of the novel The Sisters Club, as well as Ant and Honey Bee, illustrated by Brian Karas. She lives in Sebastopol, California.

Peter H. Reynolds is the illustrator of all the Judy Moody and Stink books. He is also the author-illustrator of the picture books The Dot, Ish, So Few of Me, and The North Star. He lives in Dedham, Massachusetts.
This quick-paced story offers plenty of humor as it addresses the common feeling of jealousy.
—Book Links

Funny black-and-white cartoons appear throughout. Dialogue is right on target for the character's age and feelings.
—School Library Journal

This sequel to JUDY MOODY handily matches the original in zip and wit...Even Judy could spell two words that describe both the plot and its heroine: f-r-e-s-h and f-u-n-n-y. Here's to her quick return.
—Publishers Weekly, starred review

Everything about these Judy Moody books - from the liberally illustrated, spaciously designed, accessible format to the believability of Judy's third-grade worldview - spells G-O-O-D N-E-W-S for early chapter book readers.
—Horn Book, The