Nobody Owns the Sky: The Story of "Brave Bessie" Coleman (Paperback) 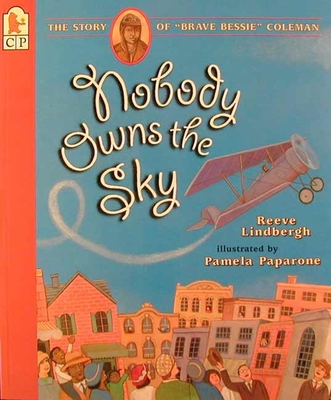 Nobody Owns the Sky: The Story of "Brave Bessie" Coleman (Paperback)


Not On Our Shelves—Ships in 1-5 Days
The story of Bessie Coleman becoming the first licensed African American aviator is sure to inspire readers to follow their own dreams.

As a young black woman in the 1920s, Bessie Coleman's chances of becoming a pilot were slim. But she never let her dream die and became the first licensed African-American aviator. Reeve Lindbergh honors her memory with a poem that sings of her accomplishment. With bold illustrations by Pamela Paparone, Nobody Owns the Sky will inspire readers to follow their dreams.
Reeve Lindbergh, daughter of aviator Charles Lindbergh and poet Anne Morrow Lindbergh, first learned about Bessie Coleman in 1986, the 60th anniversary of her father's famous flight. "Bessie was an incredibly brave person who was hardly noticed, while my parents got so much publicity it was difficult for them to live their normal lives. I saw a crazy imbalance and wanted to try to set things right." Reeve Lindbergh lives in Vermont.

Pamela Paparone observes that NOBODY OWNS THE SKY is "about making dreams come true. My own dream has always been to be a children's book illustrator. In fact, I was ten years old when I created my first children's book. I dedicated it to Johnny Cash." Pamela Paparone lives in Pennsylvania.