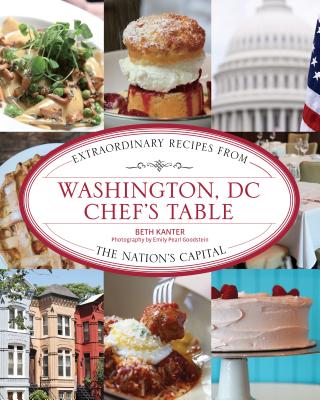 
Special Order—Subject to Availability
In Washington, DC, political rivals disagree on just about everything, but there is widespread bi-partisan support for the city's restaurant scene. The nation's capital and neighboring suburbs boast premier restaurants and inspired chefs who bring even the most hardened adversaries, to the table. Now, everyone, inside and outside the beltway, can savor a taste of the best Washington has to offer. With tantalizing recipes from more than 50 of the capital's most celebrated chefs and 100 beautiful full-color photographs, Washington, DC Chef's Table is a feast for the eyes as well as the palate.
Beth Kanter's books and articles help visitors and locals alike experience the tastes, sights, and sounds that make up Washington, DC. Beth reviews hotels for the Fodor's Washington, DC series and has authored the most recent Michelin Green Guide Washington, DC She is also the author of Food Lovers' Guide to Washington and Day Trips from Washington, DC (both Globe Pequot Press). Her essays and articles have appeared in a variety of publications, including Wondertime, Parents, Kiwi, American Baby, Shape, and the Chicago Tribune. Beth teaches writing workshops and has an MSJ from Northwestern's Medill School of Journalism. You can visit her online at www.bethkanter.com. Emily Pearl Goodstein is a photographer, sweatpants enthusiast, online organizer, and rabble rouser from Washington, DC. She leverages her status as a native Washingtonian (and expert Googler) to recommend products, restaurants, recipes, and shops (in addition to other things she finds mildly diverting) on her blog, Wild and Crazy Pearl. She spends too much money on iTunes and her favorite possession is the cobalt blue KitchenAid mixer that she used part of her Bat Mitzvah money to buy (it is still going strong). She also enjoys drinking grapefruit juice, photographing babies and baby bellies, and taking naps.

"Washington, DC Chef’s Table offers a uniquely engaging tour of the Capital City’s world-class restaurant scene. As much a storybook as it is a cookbook, Chef’s Table provides readers with history and fun facts about the region’s favorite dining rooms and the personalities behind them. This background, paired with stunning original photography, provides a frame of reference to deepen the dozens of mouthwatering, easy-to-follow recipes culled from the city’s top kitchens. You don’t have to be a celebrity chef to wow dinner guests with 4-star culinary creations or impress them with an insider’s knowledge of beltway dining. This gorgeous and engaging book has it––and is, quite simply, an indispensable addition to any DC food lover’s library."  —Josh Dinar, Founder and Publisher of DiningOut magazines and www.diningout.com

"When I first got to Washington, D.C. for grad school a decade ago, I didn't think much of the food this town had to offer. Now new restaurants pop up by the day, culinary trends emerge and evolve, and residents and visitors alike talk about a culinary renaissance in the nation's capital. Washington, D.C. Chef's Table doesn't only find some of the city's best chefs—both traditional and cutting edge—but it tells you their story and lets you in on the secrets of some of their tastiest recipes. You can sample the city's best food—and then cook it yourself."  ––Martin Andres Austermuhle, Editor-in-Chief, DCist.com

"Washington holds more secrets and spies than perhaps any other city in the world.  And no secrets are held more closely than those of the city’s chefs.  So a big kudos to Beth Kanter and her artful photographer Emily Goodstein for digging up these recipe secrets and revealing them to us in this delightfully written and illustrated treasure of a book."  ––Peter Earnest, Founding Executive Director, International Spy Museum


"The incredible recipes from DC's top chefs are reason enough to own this book, but for food lovers, it's also an invaluable guide to the city's best places to eat, from food trucks to fine dining. The recipes include some of my all-time favorite restaurant dishes, which I'll now be recreating at home."  — Amanda McClements, food writer and owner of Salt & Sundry


"The Washington DC Chef's Table does an excellent job of capturing the stories of some of DC's most well-known chefs. Beth Kanter artfully weaves in their memories and anecdotes into the recipes, giving the reader a better sense of the people behind the food. Washingtonians will be proud of our city's culinary talent and proud to have this cookbook on their bookshelves."  —Marissa Bialecki, Food writer and editor for WeLoveDC.com