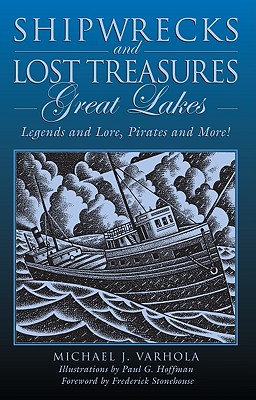 
Not On Our Shelves—Ships in 1-5 Days
Twenty-one riveting stories and illustrations about ships that met their end in the treacherous waters of the Great Lakes, such as: British gunboat H.M.S. Speedy in 1804, American Navy brig U.S.S. Niagara in 1820, Civil War steamer Island Queen in 1864, the infamous freighter Edmund Fitzgerald in 1975, and many more.
Michael J. Varhola is a freelance journalist, author or co-author of numerous books and innumerable articles, publisher of several publications, a veteran of the U.S. Army, and an avid sailor who is rated to pilot vessels up to 50 feet in length. A native of the port city of Erie, Pennsylvania, he grew up listening to stories about shipping on the Great Lakes from his father, who served as a merchant seaman aboard the S.S. North American. He lives in Springfield, Virginia. Frederick Stonehouse, noted Great Lakes maritime historian and lecturer, is author of more than 25 books.