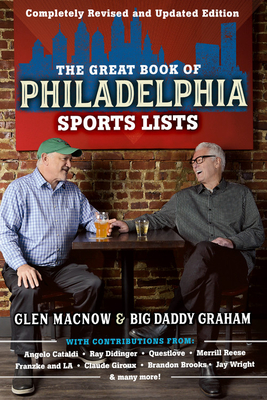 
Not On Our Shelves—Ships in 1-5 Days
When it comes to sports talk, no city has more to say than Philadelphia.
With their 2007 The Great Book of Philadelphia Sports Lists, WIP sports radio hosts Glen Macnow and Big Daddy Graham compiled dozens of sports lists to stir up dialog and debate within the buzzing Philadelphia sports community (and beyond).

A lot has happened in Philly sports since 2007 -- the Phillies' 2008 World Series win; the Eagles' record-breaking 2017 season, now-famous Philly Special play, and Super Bowl LII victory over the Patriots; the Sixers' "Trust the Process" campaign; and, of course, Gritty -- so now Glen and Big Daddy are back with dozens of new lists to keep the conversation fresh, ranking things like:

Glen Macnow has been a host on Philadelphia's WIP sports talk radio for more than twenty years, following a career as a sportswriter for The Philadelphia Inquirer. He has written more than 15 books.
Big Daddy Graham has been with WIP for twenty years. He is one of the most successful standup comics ever in Philadelphia, working more than 4,000 shows and appearing with stars such as Ray Charles and Smokey Robinson. He was previously a features reporter for FOX-29 TV in Philadelphia.