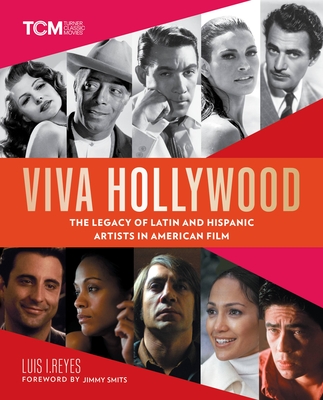 By Luis I. Reyes, Jimmy Smits (Foreword by)


On Our Shelves Now at:
Through an authoritative narrative and lavish photography, this is an in-depth history of the stars, films, achievements, and influence of the Hispanic and Latino community in Hollywood history from the silent era to the present day.

Overcoming obstacles of prejudice, ignorance, and stereotyping, this group has given the world some of its most beloved stars and told some of its most indelible stories. Viva Hollywood examines the stars in front of the screen as well as the people behind-the-scenes who have created a rich legacy across more than 100 years.

The role of Latin women on screen is explored through the professional lives of Dolores Del Rio, Rita Hayworth, Raquel Welch, Salma Hayek, Penélope Cruz, and many more. The book covers the films and careers of actors ranging from silent screen idol Antonio Moreno, to international Oscar-winning star Anthony Quinn, to Andy Garcia and Antonio Banderas. A spotlight is also given to craftspeople who elevated the medium with their artistry—visionaries like cinematographer John Alonzo, Citizen Kane scenic artist Mario Larrinaga, and Oscar-winning makeup artist Beatrice de Alba.

The stories of these and many others begins through a lens of stereotyped on-screen personas of Latin Lovers, sexy spitfires, banditos, and gangsters. World War II saw an embrace of Latin culture as the “Good Neighbor Policy” made it both fashionable and patriotic to feature stories set south of the border. Social problem films of the 1950s and '60s brought fresh looks at the community, with performances like Katy Jurado in High Noon, the cast of West Side Story, and racial inequality depicted in George Stevens's Giant. Civil Rights, the Chicano Movement, and the work of activist actors such as Ricardo Montalban and Edward James Olmos influenced further change in Hollywood in subsequent decades and paved the way for modern times and stars the likes of Jennifer Lopez and Lin-Manuel Miranda.

Illustrated by more than 200 full-color and black-and-white images, Viva Hollywood is both a sweeping history and a celebration of the legacy of some of the greatest art and artists ever captured on screen.

Luis I. Reyes is a renowned scholar, author, and lecturer who specializes in the history of Latinos in the Hollywood film industry. He is the author or coauthor of several books on film, including Hispanics in Hollywood, Made in Paradise: Hollywood’s Films of Hawaii and the South Seas, and Made in Mexico: Hollywood South of the Border.He has been featured on Turner Classic Movies, CNN, TNT Latin America, NBC, Good Morning America, and NPR’s Latino USA. His articles on film have appeared in DGA Quarterly, Hawaii magazine, the Los Angeles Times and the Oakland Tribune. Reyes lives in Pasadena, CA.

"The [new] book shows how Latinos have been involved in the film industry since its inception and puts a focus on Latinos who had a hand in creating innovative special effects for the iconic 1933 'King Kong' movie and and scenography for 'Citizen Kane' in 1941."—NBC News

"Among the most compelling parts of Reyes’ book are the tidbits of Hispanic influence that have been lost to history, like that some of Marilyn Monroe’s most famous on-screen dresses were designed by a Hispanic costumer. . . and that it was a Mexican American sculptor behind the puppets used to make the original “King Kong” movie."—Axios

"TCM has lately excelled at reframing Hollywood history and uncovering oft-ignored parts of its myth-making. Reyes' book is a sterling addition to the collection, complete with pages and pages of lush photography, in addition to its vital storytelling."—Entertainment Weekly