A Night at the Farm: A Bedtime Party (Hardcover) 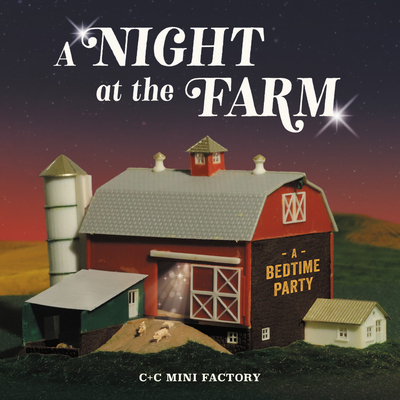 A Night at the Farm: A Bedtime Party (Hardcover)


In Stock—Click for Locations
This quirky bedtime story brings to life an eclectic cast of miniature farm animals and what they get themselves into while the farmer is fast asleep.

After a long day of work, the farmer has gone to bed. But for her farm animals, the party is just getting started. While the farmer sleeps, the cows steal her truck to go to the moo-vies, the pigs pamper themselves, and the goats put on a midnight fashion show. This photographic book of miniatures depicts the mischief the farm animals get into in this adorable bedtime book.
C+C Mini Factory received an Annual Shorty Award for Best Instagrammer. They have over 34,000 followers on Instagram, have twice been named an "account to follow" by Instagram itself, and have been featured on Instagram's feed and blog. They have been featured by Travel + Leisure, BuzzFeed, VIMBY, Time Out New York, Oyster Mag, Omaha Magazine, Brooklyn News 12, kinder MODERN blog, on the front page of the Omaha World-Herald, Bedford + Bowery, The Brooklyn Paper, Influenth, The Daily Miniature, SquintBox, What I'm Holding, and were named one of "The 25 Coolest Instagram Accounts You Should Be Following" by Business Insider India. As Influencers, C+C Mini Factory has worked with Starbucks and Mozilla Firefox. Other collaborations include Refinery29, Boundless Brooklyn, Putnam & Putnam, Miniature Rhino, Brooklyn Comedy Festival, Lammily, and Projecteo. Their work has been exhibited in galleries in New York and San Francisco.