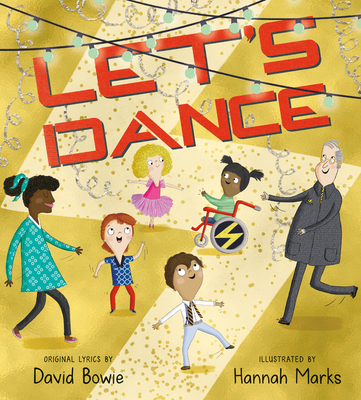 
Not On Our Shelves—Ships in 1-5 Days
For David Bowie fans young and old comes a very special picture book celebrating dancing and being joyful while paying homage to an iconic musical figure."Let's dance. Put on your red shoes and dance the blues..." Embrace the spirit and mood of iconic musician David Bowie in this must-have book for any Bowie fan, especially those wanting to introduce a new generation to a favorite musical artist. Lightly adapting the lyrics to "Let's Dance" for a younger audience, kids and parents will soon be tapping their shoes to this lively book with bright, fun, whimsical artwork.
David Bowie (1947-2016) was an English singer, songwriter, and actor. He was a figure in popular music for more than five decades and widely regarded by critics and musicians as an innovator. During his lifetime, his record sales, estimated to 140 million worldwide, made him one of the world's best-selling music artists. He was inducted into the Rock and Roll Hall of Fame in 1996.


Hannah Marks is a self-taught illustrator and designer. She was born in Derbyshire in the heart of middle England, and now lives in a village just outside of London with her husband and three children. She worked as a graphic designer before moving into illustration in 2012, and works digitally in Photoshop utilizing patterns and textures to add an organic feel to her art.