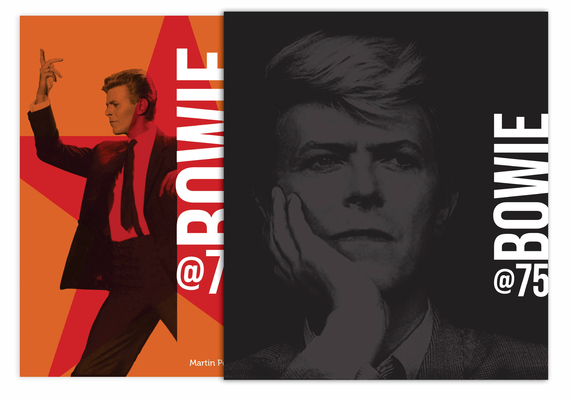 
Not On Our Shelves—Ships in 1-5 Days
A unique and beautifully produced celebration of the iconic and beloved rock star, Bowie at 75 features a slipcased hardcover with a gatefold timeline, gatefold artwork, frameable pull-out gig poster, and a pull-out photo print!

Hendrix, Joplin, Mercury…few rock artists garner as much adulation after passing as they did in life. In Bowie at 75, veteran rock journalist Martin Popoff examines David Bowie’s extraordinary life through the lens of 75 significant career achievements and life events, guiding you through all 27 studio albums, as well as a curated selection of earworm singles. But Popoff delves deeper to reveal the events that helped chart the course of Bowie’s career:

From his eponymous 1967 debut LP and ending with Blackstar, released just two days before his death, Bowie is regarded as one of the most influential musicians and performers of the previous five decades, during which he constantly redefined himself. In examining 75 touchstones, Popoff gives you a unique view of Bowie’s career arc from folkie to the breakthrough single “Space Oddity” to his flamboyant glam rock alter ego, Ziggy Stardust, and beyond.

The result is a stunning tribute to one of the most influential and admired stars in rock history—in a milestone year.

Working out of Toronto, Canada, Martin Popoff (martinpopoff.com) has penned more than 100 books on hard rock, heavy metal, classic rock, and record collecting, including Rush: The Illustrated History, Led Zeppelin: Song by Song, Pink Floyd: Album by Album, and Bowie at 75. In addition, he has appeared in Revolver, Guitar World, Goldmine, RecordCollector, bravewords.com, lollipop.com, and hardradio.com. Martin also worked on the award-winning documentaries Rush: Beyond the Lighted Stage and ZZ Top: That Little Ol’ Band from Texas for Banger Films.

"...artfully capturesthe various phases of Bowie's ever-shifting stylistic journey. Popoff's descriptions of Bowies accolades and accomplishments at those critical points in his ongoing ascendacy never fail to impress. Ultimately, Bowie at 75 is more than a mere compilation of Bowie at his best. It is, in fact, a work of art grounded in a pop persona whose influence continues to make an indelible impression on modern culture, and is likely to linger for years to come."—Lee Zimmerman, Goldmine Magazine

"The pacing of the book is dazzling, swift, and fun. It’s easy to become immersed in the chronological
history, turning page after page. Popoff’s narrative is also well designed for shorter glimpses and return visits."—Jeff Elbel, Illinois Entertainer

"The pacing of the book is dazzling, swift, and fun. It’s easy to become immersed in the chronological history, turning page after page."—Big Takeover Magazine

"...while the book is certainly a celebration of one of the most influential rock and pop artists to come out of the past five decades, Popoff isn’t simply acting as a PR arm for the Bowie estate, also calling out mediocre albums and career missteps over the course of tackling Bowie’s legacy, making for an evenhanded and ultimately much more compelling book."—New Noise Magazine

"It is one of those books that you cannot put down once you start to read it. I have read a few books in the past on Bowie and many of Martin’s books, I have to say that this is the cream of the crop and by far my favourite book to date on David and my favourite by the author. BOWIE@75 is highly recommended."

“Bowie at 75 is an absolute stunner—a 200-page, photo-heavy hardcover accounting of the icon’s entire life and career.”
—TheFilmStage.com

"Longtime fans who think they know everything about Bowie will likely find some surprising factoids that Popoff has uncovered."—Rock Cellar Magazine