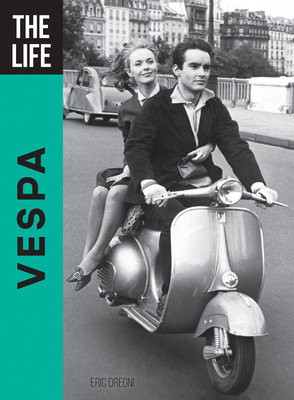 
Special Order—Subject to Availability
Since hitting the road in 1946, eighteen million Vespa motor scooters have buzzed the Earth.

Vespa's success lies in the uniqueness of its design -- in the unmistakable sheet metal skin that, over the span of decades, has defined the concept of "motor scooter."

The Life Vespa celebrates all aspects of the scooters and the thriving culture that surrounds them. Since Vespa is affordable and in high-style, the life Vespa encompasses all walks of life, from street urchins to celebrities like Audrey Hepburn, John Wayne, and Brad Pitt.

Part of Motorbooks’ “Life” series, The Life Vespa melds machine and culture to immerse you in la bella vita.

Eric Dregni is professor of English, journalism, and Italian at Concordia University in St. Paul. His obsessions range from motor scooters, about which he has authored and co-authored five books, to futuristic jet packs to oversized fiberglass town monuments to Zamboni ice resurfacers. He’s turned his fixations into twenty books including Impossible Road Trip, Let’s Go Fishing, Follies of Science: 20th Century Visions of our Fantastic Future, Weird Minnesota, Midwest Marvels, Ads That Put America on Wheels, and Let’s Go Bowling! Dregni worked in Italy for five years as a travel journalist and wrote about the experience in Never Trust a Thin Cook. In the summer, he is dean of the Italian Concordia Language Village, Lago del Bosco, in northern Minnesota, which also became a book:You’re Sending Me Where? He lives in Minneapolis.

A book for Vespa-lovers and Vespa-novices alike that will make every reader want to turn a sunny day into a Vespa day.—Italian America Magazine