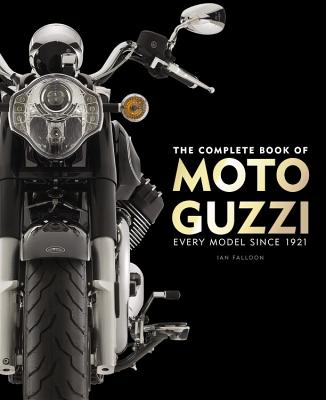 The Complete Book of Moto Guzzi collects all of these iconic motorcycles in a visual encyclopedia for a compendium unlike anything the motorcycle world has seen before.

Moto Guzzi has experienced low points as well as high points. In February 1967, a state controlled receiver took ownership of Moto Guzzi. It was while in receivership that Guzzi developed the 90-degree V twin engine that came to define Moto Guzzi. De Tomaso Industries Inc. purchased Moto Guzzi in 1973. In 2000 Aprilia S.p.A acquired Moto Guzzi. In 2004, Piaggio & C. S.p.A acquired Aprilia. With the financial backing of a large corporation like Piaggio, Moto Guzzi was once again on firm financial footing, and sales have been on the rise.

For the first time ever, The Complete Book of Moto Guzzi: Every Model Since 1921 collects all of these iconic motorcycle in encyclopedia form, written by widely respected Moto Guzzi expert Ian Falloon.

Ian Falloon was born in New Zealand and studied engineering and music at Victoria University, Wellington. After a motorcycle accident brought an end to his career as a symphony orchestra oboist, he began writing articles about motorcycles for magazines including Classic Bike, Cycle World, Motorcyclist, Two Wheels, Motorcycle Sport, and Australian Motorcycle News. His first book, The Ducati Story, has run to several editions and has been published in three languages. The success of The Ducati Story led to a series of Ducati books and histories of Honda, Kawasaki, BMW, and Moto Guzzi motorcycles including Motorbooks titles The Complete Book of Ducati, The Complete Book of Moto Guzzi, The Complete Book of Triumph Motorcycles, and The Art of Ducati. With an interest and passion spanning decades, Ian now concentrates on collecting and restoring older Italian motorcycles, particularly Ducati, MV Agusta, Laverda, and Moto Guzzi. He lives in Melbourne, Australia, and is ably supported in his projects by his family.

"Authoritatively written and beautifully presented, with 350 photos and illustrations, The Complete Book of Moto Guzzi is a needed addition to the Moto Guzzi story and one that belongs in the library of every fan of motorcycle history. "—MotorcycleClassics.com

"Lavishly illustrated with dozens of historic period black and white images and color images of models from the very first—the 1921 Normale—to today’s state-of-the-art 2017 Moto Guzzi superbikes, backed up with fine technical details of each model, Falloon has created an authoritative resource on the brand."—UltimateMotorcycling.com