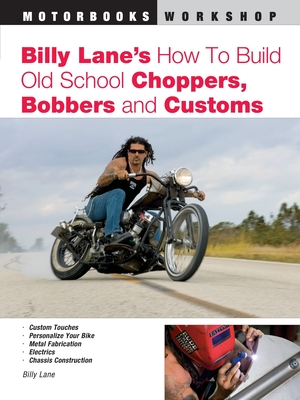 
Not On Our Shelves—Ships in 1-5 Days
Billy Lane is the fastest-rising star among the high-profile custom chopper builders, and in this book he offers many of his secrets for building a chopper that will stand out in a crowd. This is the ultimate resource for any chopper builder-a book designed as a step-by-step guide to building any type of custom motorcycle. This book also covers custom-building beyond the chopper genre, including the building of  "bobbers," an old-school style of custom that has been revived as a hot trend. Predating choppers, they are on the cutting edge of current biker "cool", for real riding, and are much safer and more functional than choppers.  Billy Lane has been featured several times on the Discovery Channel's top rated series Biker Build-Off and the Monster Garage premiere episode. Plus, He was Easyriders Builder of the Year, and winner of numerous national Best in Show awards. This book shows Billy's inside secrets of constructing a complete motorcycle, from hand fabricating metalwork to adding the detail parts that will make your bike your own creation and stand out from the crowd.  Hundreds of color photographs will lead the builder through the construction process.
Billy Lane has been involved in the chopper scene since its resurgence in the past decade, and has gained extensive exposure on TV shows such as Monster Garage, and in every major motorcycle enthusiast magazine. In 1995, he founded Choppers Inc., one of America's premier custom motorcycle building companies. Billy is a Miami native who has a mechanical engineering degree from Florida State University. Lane resides in Melbourne, Florida.
American Iron, May 2006 (circ.: 134,000)"Don't expect to get a step-by-step process of how to build a bike from scratch. That's not what this book is about, which is exactly why it's such a great read. [It's] more of a `How I build' versus a `How-to build' book, and one that offers valuable tips and insight to the aspiring shop rat. In other words, it's a must-have."