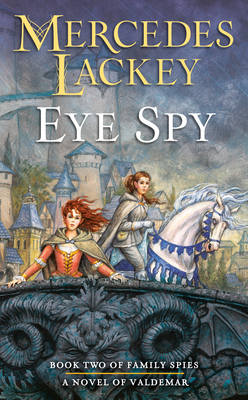 This is book number 2 in the Valdemar: Family Spies series.

In this second installment of the Family Spies series, set in the bestselling world of Valdemar, the children of Heralds Mags and Amily must follow in their parents' footsteps to protect the realm.

Mags, Herald Spy of Valdemar, and his wife, Amily, the King’s Own Herald, are happily married with three kids. Their daughter, Abidela, dreams of building on her parents' legacy by joining her father's network of spies, hoping to offset her seeming lack of a Gift.

But when Abi senses the imminent collapse of a bridge only moments before it happens, she saves countless lives, including that of her best friend, Princess Katiana. The experience, though harrowing, uncovers her unique Gift—an ability to sense the physical strains in objects.

Intrigued by the potential of her Gift, the Artificers seek to claim her as their own—but only the Healers can train her. Through training with both of them, Abi discovers unique facets of her Gift, including a synesthetic connection to objects that allows her to “see” as well as feel the strains.

Her Gift may also grant her a distinct advantage as a spy—there won’t be a building in the entire kingdom of Valdemar with a secret room that she doesn’t know about. With the help of her mentors, she must hone her gift to uncover the hidden secrets in the depths of Valdemar.
Mercedes Lackey is a full-time writer and has published numerous novels and works of short fiction, including the bestselling Heralds of Valdemar series. She is also a professional lyricist and a licensed wild bird rehabilitator.
Praise for the Herald Spy trilogy:

"Whether it’s the spellbinding world, the intrigue of the plot, or the simple yet remarkable narrative style – it is impossible to say which of these makes the story so good, but one thing is for sure: Closer to Home marks the beginning of another fantastic Lackey series." —RT Reviews

"With an unusually strong Gift that allows him to Mindspeak and Mindhear, Mags is perfectly suited for his role, and this sequel gives fans another opportunity to explore Lackey’s storied universe of Valdemar, one of the best-imagined fantasy universes in history." —Barnes & Noble Bookseller Picks

“Closer to the Heart has the two things that have always made me love these books: a richly detailed history of the world, and beautiful writing.” —The Arched Doorway