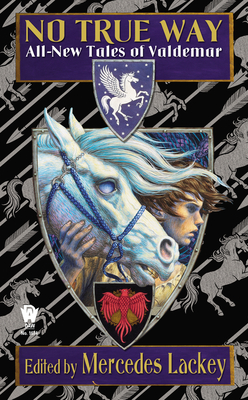 This is book number 8 in the Valdemar Anthologies series.

In March 1987, Mercedes Lackey, a young author from Oklahoma, published her first novel, Arrows of the Queen. No one could have envisioned that this modest book about a magical land called Valdemar would be the beginning of a fantasy masterwork series that would span decades and include more than two dozen titles.

Now the voices of other authors add their own special touches to the ancient land where Heralds “Chosen” from all walks of life by magical horse-like Companions patrol their ancient kingdom, dispensing justice, facing adversaries, and protecting their monarch and country from whatever threatens. Trained rigorously by the Herald’s Collegium, these special protectors each have extraordinary Gifts: Mindspeaking, FarSeeing, FarSpeaking, Empathy, Firestarting and ForeSeeing, and are bonded for life with their mysterious Companions. Travel with these astounding adventurers in sixteen original stories.
Mercedes Lackey is a full-time writer and has published numerous novels and works of short fiction, including the best-selling Heralds Of Valdemar series. She is also a professional lyricist and a licensed wild bird rehabilitator. She lives in Oklahoma with her husband, artist Larry Dixon, and their flock of parrots. She can be found at mercedeslackey.com.
"Fans of Lackey's epic Valdemar series will devour this superb anthology. Of the thirteen stories included, there is no weak link--an attribute exceedingly rare in collections of this sort. Highly recommended."
—B&N Review

"Valdemar fandom, especially, will revel in tihs sterling example of what such a mixture of fans' and pros' work can be. Engrossing even for newcomers to Valdemar."
—Booklist

"The sixth collection set in Lackey's world of Valdemar presents stories of Heralds and their telepathic horse-like Companions and of Bards and Healers, and provides glimpses of the many other aspects of a setting that has a large and avid readership. The fifteen original tales in this volume will appeal to series fans."
—Library Journal

"Though several stories build on previous Elemental Masters works, new readers will have no trouble understanding the world and its characters. The strength of the anthology comes in the unity and flow of the stories as each one builds subtly toward a gentle, thoughtful point with a perfect blend of emotion and intrigue."
—Publishers Weekly (starred) (for Elementary)