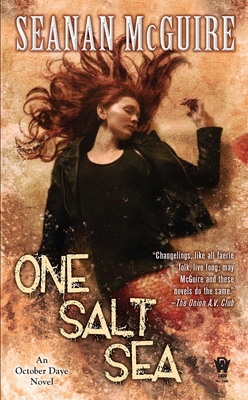 This is book number 5 in the October Daye series.

October "Toby" Daye is finally doing all right—and that inevitably means it's time for things to take a turn for the worse. Someone has kidnapped the sons of the Duchess Dianda Lorden, regent of the Undersea Duchy of Saltmist.

To prevent a war between land and sea, Toby must not only find the missing boys, but also prove that the Queen of the Mists was not behind their abduction. She'll need all her tricks and the help of her allies if she wants to make it through this in one piece.

Toby's search will take her from the streets of San Francisco to the lands beneath the waves. But someone is determined to stop her—and whoever it is isn't playing by Oberon's Laws. As the battle grows more and more personal, one thing is chillingly clear. When Faerie goes to war, not everyone will walk away.
Seanan McGuire is a California-based author with a strong penchant for travel and can regularly be found just about anyplace capable of supporting human life (as well as a few places that probably aren’t). Early exposure to a vast number of books left her with a lifelong affection for the written word, and led, perhaps inevitably, to her writing books of her own, starting somewhere around the age of eleven. The October Daye novels are her first urban fantasy series, and the InCryptid novels are her second series, both published by DAW and bother of which have put her in the New York Times bestseller list. Seanan was the winner of the 2010 John W. Campbell Award for Best New Writer; Rosemary and Rue, the first novel in the October Daye series, was named one of the Top 20 Paranormal Fantasy Novels of the Past Decade; and her novel Feed, written under the name Mira Grant, was named as one of Publishers Weekly's Best Books of 2010. She also won a Hugo for her podcast, and is the first person to be nominated for five Hugo Awards in a single year. You can visit her at www.seananmcguire.com.