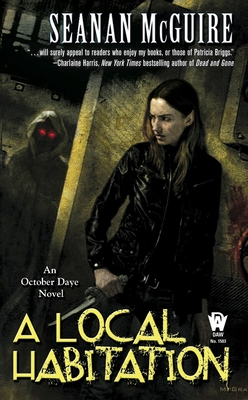 This is book number 2 in the October Daye series.

October "Toby" Daye is a changeling, the daughter of Amandine of the fae and a mortal man. Like her mother, she is gifted in blood magic, able to read what has happened to a person through a mere taste of blood. Toby is the only changeling who has earned knighthood, and she re-earns that position every day, undertaking assignments for her liege, Sylvester, the Duke of the Shadowed Hills.

Now Sylvester has asked her to go to the County of Tamed Lightning—otherwise known as Fremont, CA—to make sure that all is well with his niece, Countess January O'Leary, whom he has not been able to contact. It seems like a simple enough assignment—but when dealing with the realm of Faerie nothing is ever as simple as it seems.

Toby soon discovers that someone has begun murdering people close to January, whose domain is a buffer between Sylvester's realm and a scheming rival duchy. If Toby can't find the killer soon, she may well become the next victim.
Seanan McGuire is a California-based author with a strong penchant for travel and can regularly be found just about anyplace capable of supporting human life (as well as a few places that probably aren’t). Early exposure to a vast number of books left her with a lifelong affection for the written word, and led, perhaps inevitably, to her writing books of her own, starting somewhere around the age of eleven. The October Daye novels are her first urban fantasy series, and the InCryptid novels are her second series, both published by DAW and bother of which have put her in the New York Times bestseller list. Seanan was the winner of the 2010 John W. Campbell Award for Best New Writer; Rosemary and Rue, the first novel in the October Daye series, was named one of the Top 20 Paranormal Fantasy Novels of the Past Decade; and her novel Feed, written under the name Mira Grant, was named as one of Publishers Weekly's Best Books of 2010. She also won a Hugo for her podcast, and is the first person to be nominated for five Hugo Awards in a single year. You can visit her at www.seananmcguire.com.