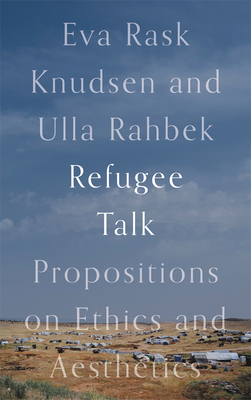 An innovative approach to the refugee crisis through a focus on language use, discourse and representation

'A wide-ranging, erudite and multi-faceted analyses of the fundamental problem of who gets to be counted as human' - Kate Evans

What does it mean to be a refugee? What political questions do they raise? Through what political rhetoric is their experiences parsed? The ongoing refugee crisis has sparked all these questions and more.

Refugee Talk uses conversation as a research method and ethical practice to approach the representation of and the discourse about and by the refugee. Though refugees who cross borders are routinely registered, filed, and detained, the individual stories they carry are just as routinely overlooked or ignored. When language itself becomes another border that excludes refugees, the need for a new vocabulary that decriminalizes and re-humanizes the refugee experience asserts itself.

The authors engage theoretically with thinkers from Hannah Arendt to Paolo Freire and Kwame A. Appiah and structure the book around conversations with academics, activists, journalists, and refugee artists and writers. The result is a comprehensive humanities approach that places ethics and aesthetics at its core.

Eva Rask Knudsen is Associate Professor in the Department of English, Germanic and Romance Studies at Copenhagen University, Denmark. Most recently, she is co-author with Ulla Rahbek of In Search of the Afropolitan: Encounters, Conversations, and Contemporary Diasporic African Literature.

Ulla Rahbek is Associate Professor in the Department of English, Germanic and Romance Studies at Copenhagen University, Denmark. Most recently, she is the author of British Multicultural Literature and Superdiversity and co-author with Eva Rask Knudsen of In Search of the Afropolitan: Encounters, Conversations, and Contemporary Diasporic African Literature.
'A wide-ranging, erudite and multi-faceted analyses of the fundamental problem of who gets to be counted as human in a planet under stress'
Kate Evans, award-winning cartoonist and activist, and author of 'Red Rosa'

'Absorbing [...] aimed at those looking to better understand the plight of refugees in terms of what the authors call 'a new humanism for the twenty-first century'. It is this humanism, urging us all to take seriously not only refugee justice, but our shared and fragile humanity, that is at the core of this remarkable book'
Anna Gotlib is an Associate Professor of Philosophy at Brooklyn College, City University of New York

'This book is built around that which is absent from most books of this kind: the voices of the refugee. It challenges us to rethink the existing refugee lexicon and to open up fresh debates about the ethics, aesthetics, and politics of representation. What is particularly heartening about the book is the way in which, at a time of such negativity, the authors attempt to frame their overall approach in a context of hope'
Roger Bromley, Emeritus Professor of Cultural Studies at the University of Nottingham

'Deftly weaving theoretical analysis with conversations from journalists, activists, and exiles themselves, 'Refugee Talk' stunningly accomplishes what responsible critique demands of us all: nuanced, ethical and material engagement with those to whom our thought is indebted'
Sabeen Ahmed, Assistant Professor of Philosophy, Swarthmore College

'In the midst of political conflicts concerning refugees, 'Refugee Talk' steps back from the immediate fray to reflect on the ethical character of 'refugee talk' in academic, media, activist artistic and literary contexts. The result is a genuinely thoughtful - and engagingly conversational - work that re-orients us to the recognition of hope as a common human dynamic and to a critical humanism expressed in acknowledging the dignity of refugees. Highly recommended'
David Owen, Professor of Politics and International Relations, University of Southampton

'A lively and accessible intervention and an elegant collocation of multiple voices, many of whom are refugees. Rahbek and Knudsen make a compelling argument for a new politics of hope'
Sam Durrant, Associate Professor of Postcolonial Studies at the University of Leeds