Voices of the Nakba: A Living History of Palestine (Paperback) 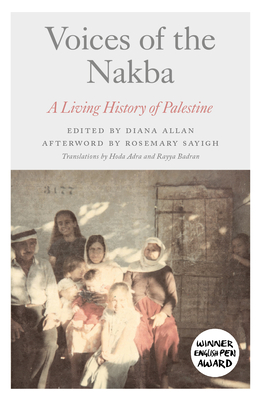 Voices of the Nakba: A Living History of Palestine (Paperback)

During the 1948 war more than 750,000 Palestinian Arabs fled or were violently expelled from their homes by Zionist militias. The legacy of the Nakba - which translates to ‘disaster’ or ‘catastrophe’ - lays bare the violence of the ongoing Palestinian plight.

Voices of the Nakba collects the stories of first-generation Palestinian refugees in Lebanon, documenting a watershed moment in the history of the modern Middle East through the voices of the people who lived through it.

The interviews, with commentary from leading scholars of Palestine and the Middle East, offer a vivid journey into the history, politics and culture of Palestine, defining Palestinian popular memory on its own terms in all its plurality and complexity.

Diana Allan is Associate Professor of Anthropology at McGill University. She is a filmmaker and the co-founder of the Nakba Archive. Her ethnography, Refugees of the Revolution: Experiences of Palestinian Exile, (Stanford University Press, 2013) won the MEMO Palestine academic book award and the American Anthropological Association, Middle East Section Award.