Project Beta: The Story of Paul Bennewitz, National Security, and the Creation of a Modern UFO Myth (Paperback) 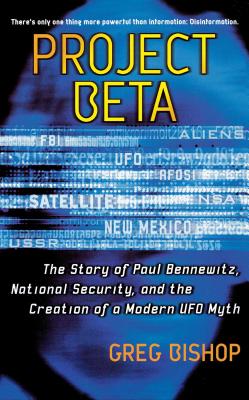 Project Beta: The Story of Paul Bennewitz, National Security, and the Creation of a Modern UFO Myth (Paperback)


Not On Our Shelves—Ships in 1-5 Days
The shocking true story of the United States government’s quest to hide the reality of extraterrestrial contact, even at the cost of its citizens.

In 1978, Paul Bennewitz, an electrical physicist living in Albuquerque, New Mexico, became convinced that the strange lights he saw hovering in the night sky were extraterrestrial. He reached out to newspapers, senators, and even the president before anyone responded. Air Force investigators listened to his story, as did Bill Moore, the author of the first book on the infamous Roswell UFO incident.

Unbeknownst to Bennewitz, Moore was hired by a group of intelligence agents to keep tabs on Bennewitz while the Air Force ran a psychological profile and disinformation campaign on the unsuspecting physicist. In return, Air Force Intelligence would let Moore in on classified UFO material.

What follows is a scandalous true tale of disinformation, corruption, and exploitation, all at the hands of the United States intelligence community.
Greg Bishop publishes and edits the UFO/conspiracy/psychedelic/new science journal The Excluded Middle. His reports, interviews, and features have also appeared in Fortean Times, UFO Magazine, Magical Blend, The Nose, Crash Collusion, Book Happy, and in the books Conspiracy and Cyberculture, Zen And The Art of Close Encounters, You Are Being Lied To, and Kooks. Greg has spoken publicly at numerous conferences and meetings, including an appearance as a panel member and featured speaker at the Disinfocon conference in New York City, described by the New York Times as the “Cyberpalooza of the Internet culture.” He has also appeared on many radio and Internet interview programs, including The X Zone, Strange Days, The Paul Garson Show, and The Infinity Factory. His radio show, Radio Mysterioso, can be can be heard on the Internet on Sundays at KillRadio.org.
"This is both a true story and a little known but extremely important event in the social history of the fringe movements that swept America during the 1990s."
-- Paul Davids, Executive Producer for Showtime's Roswell