The Story of the Night: A Novel (Paperback) 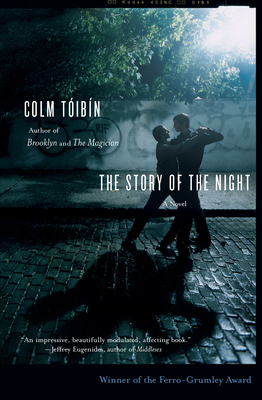 The Story of the Night: A Novel (Paperback)


Not On Our Shelves—Ships in 1-5 Days
From the award-winning author of Brooklyn and The Master, a powerful, brave, and moving novel set in Argentina.

In Argentina, in the time of the Generals, the streets are empty at night, and people have trained themselves not to see. Richard Garay lives with his mother, hiding his sexuality from her and from society. Stifled by his job, Richard is willing to take chances, both sexually and professionally. But Argentina is changing, and as his country edges toward peace, Richard tentatively begins a love affair. The result is a powerful, brave, and poignant novel of sex, death, and the difficulties of connecting one's inner life with the outside world.
Colm Tóibín is the author of ten novels, including The Magician, winner of the Rathbones Folio Prize; The Master, winner of the Los Angeles Times Book Prize; Brooklyn, winner of the Costa Book Award; The Testament of Mary; and Nora Webster, as well as two story collections and several books of criticism. He is the Irene and Sidney B. Silverman Professor of the Humanities at Columbia University and has been named as the laureate for Irish fiction for 2022–2025 by the Arts Council of Ireland. Three times shortlisted for the Booker Prize, Tóibín lives in Dublin and New York.
"An impressive, beautifully modulated, affecting book."
-- Jeffrey Eugenides, author of Middlesex

"A fine novel, remarkable for the purity of its ambitions."
--The Washington Post Book World

"Tóibín's genius is that he makes it impossible for us to walk away."
-- The New Yorker

"This is my favourite of Tóibín’s works. Set in the early eighties, Argentina is controlled by oil-rich Americans and power-hungry Generals. A young English professor has been living in the shadow of his mother and hiding his sexual desires. When he is liberated by her death, both he and the country around him are set into a period of enlightenment and upheaval. The loss and grief in the third act left me reeling for days."
--Douglas Stuart, author of Shuggie Bain