Squash: A History of the Game (Hardcover) 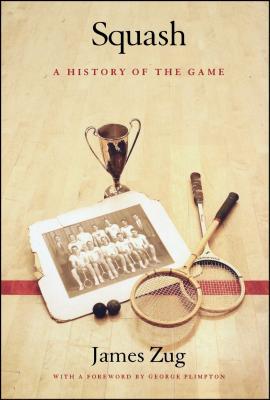 Squash: A History of the Game (Hardcover)


Not On Our Shelves—Ships in 1-5 Days
The first comprehensive history of squash in the United States, Squash incorporates every aspect of this increasingly popular sport: men's and women's play, juniors and intercollegiates, singles and doubles, hardball and softball, amateurs and professionals.
Invented by English schoolboys in the 1850s, squash first came to the United States in 1884 when St. Paul's School in New Hampshire built four open-air courts. The game took hold in Philadelphia, where players founded the U.S. Squash Racquets Association in 1904, and became one of the primary pastimes of the nation's elite. Squash launched a U.S. Open in 1954, but its present boom started in the 1970s when commercial squash clubs took the sport public. In the 1980s a pro tour sprung up to offer tournaments on portable glass courts in dramatic locales such as the Winter Garden at the World Trade Center.
James Zug, with access to private archives and interviews with hundreds of players, describes the riveting moments and sweeping historical trends that have shaped the game. He focuses on the biographies of legendary squash personalities: Eleo Sears, the Boston Brahmin who swam in the cold Atlantic before matches; Hashim Khan, the impish founder of the Khan dynasty; Victor Niederhoffer, the son of a Brooklyn cop; and Mark Talbott, a Grateful Dead groupie who traveled the pro circuit sleeping in the back of his pickup. A gripping cultural history, Squash is the book for which all aficionados of this fast-paced, exciting game have been waiting.
James Zug was born in Philadelphia in 1969. He captained the squash team at Dartmouth College. A senior writer at Squash Magazine, he has written for The Atlantic Monthly, Outside, The New York Times Book Review and Tennis Week. He holds a master?s in nonfiction writing from Columbia University and lives with his wife in Washington, D.C.
Tom Wolfe The squash world has been waiting for a book like this. I bet even the most dedicated and knowledgeable maestros of tight rails and feathery drop shots will learn lots of fascinating stuff they never knew before.

Mark Talbott From schoolboys swatting balls on outdoor walls to the pros competing on portable glass courts in Grand Central Station, Squash beautifully conveys the fierce battles, exciting developments and many unforgettable personalities who have loved our game."

Frank Deford Expert/hacker, hardball/softball, doubles/singles -- all squash devotees should read James Zug's comprehensive and passionate account of the history of their game.