If You Loved Me You'd Think This Was Cute: Uncomfortably True Cartoons About You (Paperback) 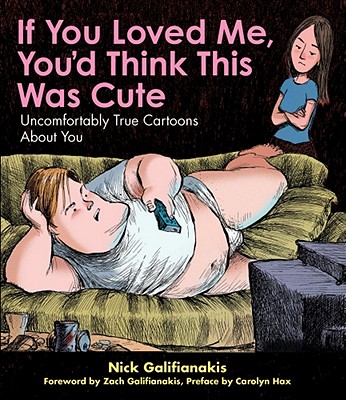 If You Loved Me You'd Think This Was Cute: Uncomfortably True Cartoons About You (Paperback)


Special Order—Subject to Availability
Nick Galifianakis provides a cynical, yet hilarious take on the ups and downs of love, relationships and pets. Zach Galifianakis, start of The Hangover, will provide the foreword.

Everyone knows the only thing more painful than relationships is not having them--or is it the other way around? Whatever, says author and cartoonist Nick Galifianakis. In his first book, If You Loved Me, You'd Think This Was Cute: Uncomfortably True Cartoons About You, he makes the case that either way, the only recourse is to embrace our frailties and laugh.

Taken from Carolyn Hax's nationally syndicated advice column, this compilation spins the pain of dating, mothers-in-law, "beneficial" friends and more into ... the pain of self-recognition. The intricately drawn pen-and-ink panels and pointed captions explore some of life's most uncomfortable truths, exposing the humanity in our mistakes, the underbelly of our triumphs and the sheer heroism of trying and trying again.

Throughout this character study of men and women (and the dogs who love them), Galifianakis mines our hopes and insecurities for a unifying truth: If we can't laugh at ourselves, he'll do it for us.

"Nick snuck me into my first comedy club when I was only a back-acned teenager. The back acne went away but the comedy stuck. I know that last sentence sounds like a lyric from a Joan Baez song, but trust me, it's original." --Zach Galifianakis, from the foreword

"Nick's cartoons are funny, witty, and smart. But what makes them so special are how universal and true they are, making the laughs they bring all the more poignant. Relationships, in all their glory, have never been captured quite so succinctly and with such charm." --Amy B. Harris, writer/producer for Sex and the City

"Nick Galifianakis understands relationships unbelievably well, for a guy. My guess is he actually menstruates." --Gene Weingarten, two-time Pulitzer Prize winner, Washington Post humor columnist
Nick Galifianakis is an American cartoonist whose work is nationally recognized alongside the must-read advice column by Carolyn Hax. The column appears in nearly two hundred newspapers and is one of the most popular features on washingtonpost.com. It also was named by Time magazine as America's best advice column. Contributing a foreword is Zach Galifianakis, the author's first cousin and the runaway star of The Hangover and Due Date. Nick resides in the Washington, D.C., area with his canine alter ego, ZuZu.