The Immortal Comedy: The Comic Phenomenon in Art, Literature, and Life (Hardcover) 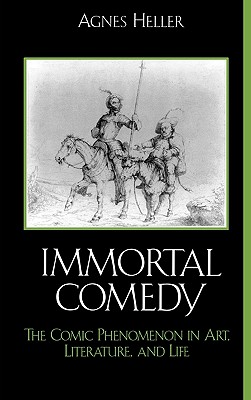 The Immortal Comedy: The Comic Phenomenon in Art, Literature, and Life (Hardcover)


Not On Our Shelves—Ships in 1-5 Days
Immortal Comedy is the first book to 'think' philosophically about the comic phenomenon in general. Although author Agnes Heller had written a book that is both deeply scholarly and meditative on the subject of the comic form in film, literature, and life her writing is eminently approachable. In both its subject and style, Immortal Comedy is a seminal book. In it, Heller takes us on a journey through theories of comedy beginning with classical thought. She then detours through foundational political thinkers who refer to, for instance, laughter and power. We are also introduced to modern systematic approaches to thinking comedy, psychological approaches, and existential approaches. The discerning combination of Heller's individual taste for the pantheon of comedic work and, also, what critics may consider 'less significant' work gives this book a character apart from all others. It is the detail with which Heller makes her discussion, how and where she locates 'the comic, ' and probably most significantly her discussion of comedy and our own lives that makes Immortal Comedy a principal book for the entire range of humanities scholars and enthusiasts.
Agnes Heller is The Hannah Arendt Professor of Philosophy and Political Science at New School University.