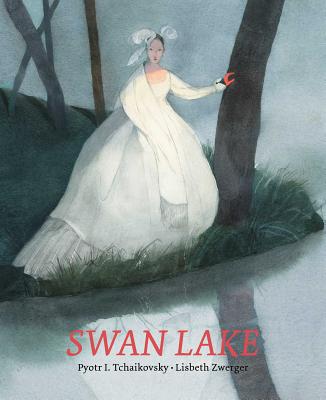 
In Stock—Click for Locations
With flash, the lake was based in a shimmering light, and before him stood the most beautiful woman he had ever seen. “I am the Swan Queen,” she said. “I am the swan that you tried to kill.”

Swan Lake is perhaps the best-loved ballet of all time. Hans Christian Andersen Medal-winner Lisbeth Zwerger brings her singular vision to a glorious picture-book adaptation of the haunting story of an enchanted swan princess. She has based her version on Tchaikovsky’s original 1877 ballet, which had a happy ending, unlike the later, better-known, 1893 version. Her illustrations, luminous, lyrical, filled with grace and beauty, evoke the brilliance of the ballet and the universal appeal of this beloved fairy tale.
Lisbeth Zwerger has been accorded nearly every prize that can be given, including the highest international award for lifetime achievement, the Hans Christian Andersen Medal. Since 1981 she has devoted her extraordinary talents to children’s literature, to stories as charming and picturesque as her native Vienna. Always surprising, always engaging, her artwork combines technical mastery with an insight and gentleness so rare and captivating that she has been correctly called one of the finest illustrators of the twentieth century.

Pyotr Ilyich Tchaikovsky was a Russian composer whose music is among the most popular of its period. Tchaikovsky was thirty-one years old when he wrote a one-act fairy-tale dance piece. He wrote it for the children of his sister, Alexandra Davydova, and named it Swan Lake. Four years later, he received a commission from the Moscow Theater to make a ballet of the same title.
. . . With her retelling of Tchaikovsky’s “Swan Lake,” Zwerger has found her own extraordinary voice. . . . This book is a marvel.
— New York Times Book Review