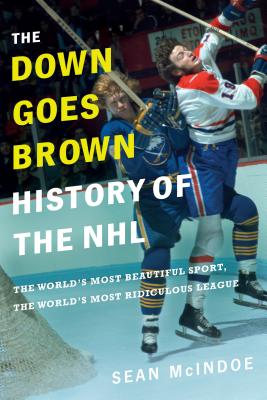 
Special Order—Subject to Availability
Sean McIndoe of Down Goes Brown, one of hockey's favourite and funniest writers, takes aim at the game's most memorable moments--especially if they're memorable for the wrong reasons--in this warts-and-all history of the NHL.

The NHL is, indisputably, weird. One moment, you're in awe of the speed, skill and intensity that define the sport, shaking your head as a player makes an impossible play, or shatters a longstanding record, or sobs into his first Stanley Cup. The next, everyone's wearing earmuffs, Mr. Rogers has shown up, and guys in yellow raincoats are officiating playoff games while everyone tries to figure out where the league president went. That's just life in the NHL, a league that often can't seem to get out of its own way. No matter how long you've been a hockey fan, you know that sinking feeling that maybe, just maybe, some of the people in charge here don't actually know what they're doing. And at some point, you've probably wondered: Has it always been this way?
The short answer is yes. As for the longer answer, well, that's this book.
In this fun, irreverent and fact-filled history, Sean McIndoe relates the flip side to the National Hockey League's storied past. His obsessively detailed memory combines with his keen sense for the absurdities that make you shake your head at the league and yet fanatically love the game, allowing you to laugh even when your team is the butt of the joke (and as a life-long Leafs fan, McIndoe takes the brunt of some of his own best zingers). The "Down Goes Brown" History of the NHL is the weird and wonderful league's story told as only Sean McIndoe can.
SEAN McINDOE has appeared as a featured hockey columnist for sites including Sportsnet, VICE Sports, ESPN and Grantland. With his sense of humour, strong opinions and in-depth knowledge of the game's history, he has built one of the web's biggest hockey-writing readerships and produces new content throughout the season while making regular appearances on radio, television and podcasts. He maintains a large and loyal social media following, one that led Sports Illustrated to name him one of the 100 best Twitter follows in sports.
“In this fun, irreverent, and fact-filled history, McIndoe writes his obsessively detailed memories, combined with his keen sense for the head-shaking absurdities of the league. All this, while acknowledging the love for the game.” —The New Classical FM

“This is the book that Sean McIndoe was born to write, if only because the history of the NHL requires heavy doses of skepticism and sarcasm to prevent nausea. Hilarious, insightful and the only hockey book I’ve ever read that can balance a perceptive look at the history of fighting with how Harrison Ford indirectly saved the Colorado Avalanche. It’s like having a guy at the pub giving you a master class in hockey history, except he’s smarter and funnier than your drunk ass will ever be.” —Greg Wyshynski, Senior NHL Writer, ESPN

“On a sunny, summer afternoon from my cottage deck, I picked up Sean McIndoe’s book and could not put it down until I was done reading it. The Down Goes Brown History of the NHL is a delightful read, of course humorous because it’s McIndoe, but impressively informative in finding a way to cram 101 years of NHL hockey into 249 pages. The wonderfully written book is also a reminder that while the NHL is a business, it’s also entertainment, and sometimes we need to stop taking ourselves so seriously. We love the game, but let’s remember it’s just that, a game. McIndoe’s historical account entertains and informs all at once.” —Pierre LeBrun, TSN Insider and columnist for The Athletic

“Who better to chronicle off-the-wall hockey history than the off-the-wall Down Goes Brown, aka Sean McIndoe.” —Bob McKenzie, TSN Insider and author of Hockey Confidential