Capitalism in America: An Economic History of the United States (Paperback) 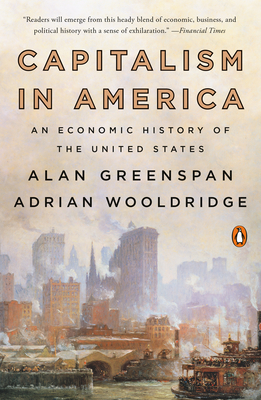 Capitalism in America: An Economic History of the United States (Paperback)


On Our Shelves Now at:
From the legendary former Fed Chairman and the acclaimed Economist writer and historian, the full, epic story of America's evolution from a small patchwork of threadbare colonies to the most powerful engine of wealth and innovation the world has ever seen.

From even the start of his fabled career, Alan Greenspan was duly famous for his deep understanding of even the most arcane corners of the American economy, and his restless curiosity to know even more. To the extent possible, he has made a science of understanding how the US economy works almost as a living organism--how it grows and changes, surges and stalls. He has made a particular study of the question of productivity growth, at the heart of which is the riddle of innovation. Where does innovation come from, and how does it spread through a society? And why do some eras see the fruits of innovation spread more democratically, and others, including our own, see the opposite?

In Capitalism in America, Greenspan distills a lifetime of grappling with these questions into a thrilling and profound master reckoning with the decisive drivers of the US economy over the course of its history. In partnership with the celebrated Economist journalist and historian Adrian Wooldridge, he unfolds a tale involving vast landscapes, titanic figures, triumphant breakthroughs, enlightenment ideals as well as terrible moral failings. Every crucial debate is here--from the role of slavery in the antebellum Southern economy to the real impact of FDR's New Deal to America's violent mood swings in its openness to global trade and its impact. But to read Capitalism in America is above all to be stirred deeply by the extraordinary productive energies unleashed by millions of ordinary Americans that have driven this country to unprecedented heights of power and prosperity.

At heart, the authors argue, America's genius has been its unique tolerance for the effects of creative destruction, the ceaseless churn of the old giving way to the new, driven by new people and new ideas. Often messy and painful, creative destruction has also lifted almost all Americans to standards of living unimaginable to even the wealthiest citizens of the world a few generations past. A sense of justice and human decency demands that those who bear the brunt of the pain of change be protected, but America has always accepted more pain for more gain, and its vaunted rise cannot otherwise be understood, or its challenges faced, without recognizing this legacy. For now, in our time, productivity growth has stalled again, stirring up the populist furies. There's no better moment to apply the lessons of history to the most pressing question we face, that of whether the United States will preserve its preeminence, or see its leadership pass to other, inevitably less democratic powers.
Alan Greenspan was born in 1926 and reared in the Washington Heights neighborhood of New York City. After studying the clarinet at Juilliard and working as a professional musician, he earned his BA, MA, and PhD in economics from New York University. In 1954, he cofounded the economic consulting firm Townsend-Greenspan & Company. From 1974 to 1977, he served as chair of the Council of Economic Advisors under President Gerald Ford. In 1987, President Ronald Reagan appointed him chairman of the Federal Reserve Board, a position Greenspan held until his retirement in 2006. He is the author of the #1 New York Times bestseller The Age of Turbulence.

Adrian Wooldridge is a Washington correspondent for The Economist and was its West Coast bureau chief, based in Los Angeles. He is the author of Measuring the Mind: Education and Psychology in England, 1860–1990. He has written for The Wall Street Journal, The New Republic, and The Times of London, and has appeared on NPR and the BBC.
“This book snaps, crackles and pops . . . Three themes are highlighted—productivity as the measure of economic progress; the ‘Siamese twins of creation and destruction’ as the sources of productivity growth; and the political reaction to the consequences of creative destruction . . . Readers will emerge from this heady blend of economic, business, and political history with a sense of exhilaration that so much of the American experience could be described so vividly and insightfully.” —Financial Times, one of the Best Books of The Year in Economics

“Capitalism in America makes a strong case, with some wonderful insights into business history. Innovation, spread to the masses, is indeed the engine of capitalist economies.” —The Economist

“A compelling and well-documented single-volume history. It reminds us of how the US has beaten the world in the past 150 years and why it might still be unwise to bet against it now.” —The Times of London

“A masterful guide to capitalism American style . . . You don’t have to be an economics wonk to enjoy and learn from Capitalism in America.” —The Washington Times

“Capitalism in America is a delightful romp through the 400-year economic life of America from agricultural giant to industrial juggernaut to information/technology revolutionary. Stories and statistics sparkle on every page. But the book is more than a history. It is a policy guide to make sure capitalism in America flourishes like never before . . . this book is required reading for anyone who cares about life, liberty, and prosperity in America.” —The American Conservative

“Strongly recommended. This illuminating and in-depth history . . . is a valuable contribution to U.S. business history because it explains financial events and the culture of innovation from macro­economic perspectives and offers remarkable insights into the current business climate.” —Library Journal, starred review

“A smart and engaging look at the workings of the economic machine under various regimes, isolationist and internationalist alike.” —Kirkus

“A sweeping and brilliantly told narrative by two authors who have spent their careers thinking about the wellsprings of economic growth. Anchored by the combination of Alan Greenspan’s legendary skill with data and talent for analysis, and Adrian Wooldridge’s knowledge and perspective on business history, Capitalism in America is full of insights that will surprise you and change your perspective on many of the key episodes of U.S history.” —Liaquat Ahamed, author of Lords of Finance, winner of the 2010 Pulitzer Prize

“A work of bold sweep and illuminating insight that tells nothing less than the story of American capitalism—both its extraordinary achievements and its darkest moments—from the earliest days in colonies ‘at the edge of the world,’ to the Internet revolution. Greenspan and Wooldridge combine penetrating analysis with striking portraits of the people who made it all happen, which, together, demonstrate their theme of the constant capacity for innovation and reinvention. At a time when ‘capitalism’ itself is a subject of doubt and target of assault, this is a book that the times demand, and one that will contribute much to the debate.” —Daniel Yergin, author of The Prize and The Quest and co-author of Commanding Heights: the Battle for the World Economy