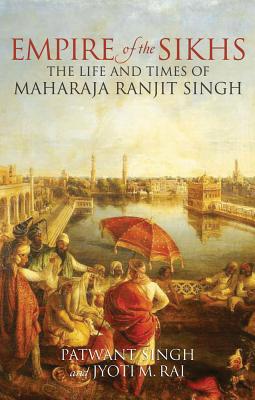 The definitive biography of Ranjit Singh, contemporary of Napoleon and one of the most powerful and charismatic Indian rulers of his age

Ranjit Singh has been largely written out of accounts of the subcontinent's past by recent Western historians, yet he had an impact that lasts to this day. He unified the warring chiefdoms of the Punjab into an extraordinary northern Empire of the Sikhs, built up a formidable modern army, kept the British in check to the south of his realm, and closed the Khyber Pass through which plunderers had for centuries poured into India. Unique among empire builders, he was humane and just, gave employment to defeated foes, honored religious faiths other than his own, and included Hindus and Muslims among his ministers. In person he was a colorful character whose his court was renowned for its splendor; he had 20 wives, kept a regiment of "Amazons," and possessed a stable of thousands of horses. The authors make use of a variety of eyewitness accounts from Indian and European sources, from reports of Maratha spies at the Lahore Durbar to British parliamentary papers and travel accounts. The story includes the range of the maharaja's military achievements and ends with an account of the controversial period of the Anglo-Sikh Wars following his death, which saw the fall of his empire while in the hands of his successors.

Patwant Singh (1925–2009) was one of India's leading writers on Indian history, politics, international affairs, and the environment. His recent books include The Sikhs and The World According to Washington. Jyoti M. Rai is an internationally renowned numismatist who has built up one of the most impressive collections of Sikh coins anywhere in the world. She also possesses a large archive of rare books and documents relating to 18th- and 19th-century Sikh history.
"This ambitious and scholarly work . . . [is] bracing to read, offering, as it does, a crash course in a religion and culture that may be less than familiar to many readers."  —Washington Post Book World on The Sikhs

"An essential book for any South Asian collection."  —Kirkus Reviews on The Sikhs

"Refreshing . . . this book is grounded in solid history and written with an admirable clarity. I hope it will be widely read."  —Howard Zinn, author, A People's History of the United States

". . . the first proper biography in English of this interesting ruler and soldier. . . this book will certainly be of value to anyone interested in the history of India." —The NYMAS Review