People of the Twenty-First Century (Paperback) 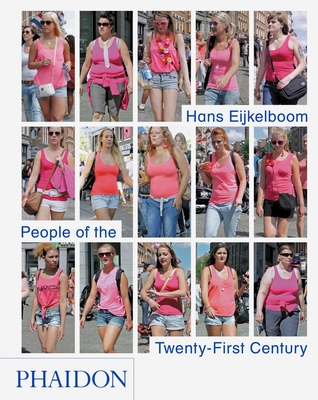 People of the Twenty-First Century (Paperback)


Backordered
Hans Eijkelboom: People of the Twenty-First Century is an enormous and completely fascinating collection of 'anti-sartorial' photographs of street life by the Dutch conceptual artist/street photographer. From Amsterdam to New York and Paris to Shanghai, these photographs, taken over a period of more than twenty years, provide a cumulative portrait of the people of the twenty-first century. A magnetic panoply of images, this cult object has a place in the library of every photography book collector as well as anyone interested in contemporary culture. Democratic, apolitical and unique, the archive of thousands of images offers an engrossing and engaging cross-section of society.
Over the course of the last two decades, the Dutch photographer worked methodically on his monumental Photo Notes project: First he would select a busy pedestrian area – his favourite spots were often near shopping centres – where he would stay for 30 minutes up to a few hours. He then spent time observing passers-by before recognizing a common type, normally based on a garment, sometimes a behaviour: people in band T-shirts, fur caps or beige trench coats; young couples walking arm-in-arm; women in suit dresses; men with gelled hair or pushing shopping trolleys… He snapped them with a camera hung around his neck, attached to a trigger in his pocket. Back in the studio, the images were laid into grids called Photo Notes. Their simplicity of form and presentation belies their complex anthropological, social and artistic commentary.
For over forty years, Hans Eijkelboom (b.1949) has investigated the cult of the self, celebrity and the ‘man in the street’. Quiet and unassuming and based in his studio near Amsterdam, he has created an extraordinary body of work that questions who we are and how we portray ourselves. His self-published photobooks, numbering over fifty, are collectors’ items. His work has been exhibited in Amsterdam, New York and at the Bienal de São Paulo.

"A fascinating anthropological study of taste, individuality and consumerism. Who knew there were so many Lovejoy leather jackets in the world?"—Esquire

"Simultaneously mundane and compelling. Laid out in a grid, the shots of women wearing pink T shirts or businessmen carrying briefcases have a hypnotic, repetitious quality, but the longer you look at them, the more nuances become apparent."—The Guardian