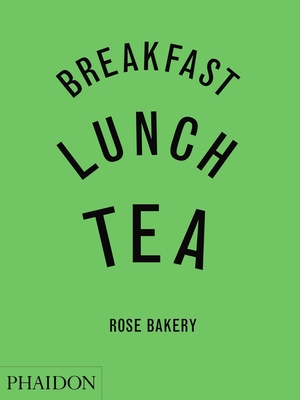 Breakfast, Lunch & Tea is the first cookbook by Rose Carrarini, who co-founded the much imitated delicatessen Villandry in London in 1988 and now serves her signature simple, fresh and natural food at Rose Bakery, the Anglo-French bakery and restaurant in Paris. This book includes recipes for 100 of Rose Bakery’s most popular dishes, from breakfast staples such as crispy granola to afternoon treats, including sticky toffee pudding and carrot cake, as well as soups, risottos and other dishes perfect for a light lunch.

Rose Carrarini opened Rose Bakery, a small bakery, shop and restaurant in Paris, with her husband Jean-Charles in 2002. After working in the fashion industry for ten years, the Carrarinis set up Villandry, their first food venture, in London in 1988. This ‘epicerie fine’ in Marylebone inspired many other food places in London, and formed the foundation for their work at Rose Bakery.

"A perfect marriage between French style and sensible English cooking." —The Independent

"Manages to convey the sense that baking a good cake and placing it on a counter, still warm, is a wonderful way to show love and make people happy." —The Guardian

"There's so much here you actually want to cook. Which is what food writing is all about." —Evening Standard

"So evocatively written and beautifully shot, you can almost sniff the delicious scent of baking as you leaf through the pages." —The Sunday Tribune (Ireland)

"Nowadays, with artisan bakeries and posh cake shops opening up and down the country, it's easy to take salted caramel doughnuts and passion fruit macarons somewhat for granted. But even as recently as 2006, Rose Carrarini's simple but inventive recipes for ricotta cheesecake, pistachio cake, caramel tarts and hot gingernut biscuits - miles away from both formal French patisserie and the home baking of the local village fete - were a rarity. It's not just cakes and bakes that make this book so special. Breakfast Lunch Tea's recipes for homemade granola, buckwheat pancakes and quinoa salad predated the craze for avocado toast and its ilk by several years, quietly bringing imaginative brunch recipes into the home. If Breakfast Lunch Tea didn't exactly create the current enthusiasm for baking, it was certainly one of its leading lights, paving the way for a modern, unfussy aesthetic that's now almost standard in both cafes and homes across the UK, and the world." —Observer Food Monthly