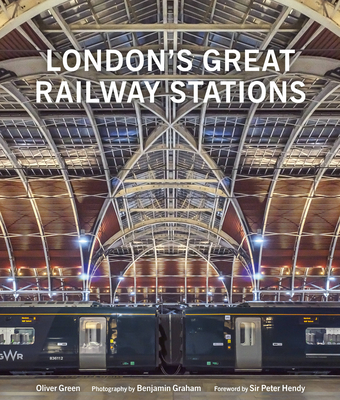 
Not On Our Shelves—Ships in 1-5 Days
This lavish photographic history of the most beautiful and historic railway stations in London tells a story of power, progress and innovation, from the beginning of steam age to the teeming commuter hubs of today.

London has more mainline railway stations than any other city in the world and many of them are amongst its grandest architectural monuments. Its earliest terminals opened in the late 1830s when lines between the capital and the regions were built in the first railway boom. The original station at London Bridge, the capital’s first passenger terminus, was opened in December 1836, six months before Queen Victoria came to the throne. The last main line to London, the Great Central Railway to Marylebone, was opened in March 1899, two years before Victoria died.

Ever since they originally opened, these stations have been at heart of London life and activity and have dominated the architectural landscape. Many are now in the midst of major reconstructions and are the centrepieces for the transformation of whole swathes of London, from Paddington to King's Cross.

This comprehensive story combines a historical overview, archive illustrations and specially commissioned photography, covering the origins of the earliest stations up to the latest reconstructions and renovations.

Written by the expert author Oliver Green, this is an essential gift for anyone interested in the history of London and its transport.

Oliver Green is a historian who has written widely on the history of public transport in London. He is the former head curator and now research fellow at the London Transport Museum, also a Fellow of the Royal Society of Arts (FRSA) and a museums advisor to Arts Council England. Oliver lectures regularly to societies and museums, including the Victoria & Albert Museum, London.

Benjamin Graham won the prestigious UK Landscape Photographer of the Year competition in 2017. He is a club-circuit lecturer, an international photo-tour leader and a residential course photography tutor at West Dean College, West Sussex. His work is inspired by the beauty of the UK’s coast, its countryside and its architecture.