Listen to This If You Love Great Music: A critical curation of 100 essential albums • Packed with links for further reading, listening and viewing to take your enjoyment to the next level (Hardcover) 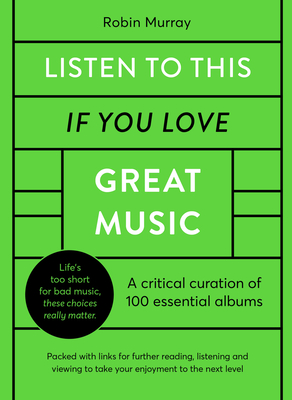 Listen to This If You Love Great Music: A critical curation of 100 essential albums • Packed with links for further reading, listening and viewing to take your enjoyment to the next level (Hardcover)


Not On Our Shelves—Ships in 1-5 Days
Listen To This If You Love Great Music is a must read for anyone with even a passing interest in music. Featuring 100 of the best albums from the last four decades, clashmusic.com​ editor Robin Murray shares his passion for exceptional music and offers insightful takes on what elevates these records above the competition.

Robin steers clear of the usual classics – The Beatles and The Clash, for example – and instead goes deep into his record collection to pull out the albums he considers the greatest ever. For each, a solid case is made for why it represents a watershed moment in music history, outlining the story behind the record and critiquing what constitutes a classic. Uniquely curated to offer a fresh perspective on the last 40-plus years of music, find politically charged rock brushing shoulders with dub-infused electronica, progressive pop and dreamy shoegaze shaken awake by ear-drum rattling grime and house music.

Whether it’s bass-heavy hip-hop from Nas that inspired a thousand MCs to pick up a mic or experimental indie dance from LCD Soundsystem that blurred genres and tempted musicians to trade in their guitars for synthesizers, this is an essential rundown of the albums that really matter. You need to play them loud.

Robin Murray is Editor-in-Chief at Clash, having worked on the magazine for over a decade interviewing the likes of Michael Stipe, Lizzo, Nile Rogers, Blondie, Graham Coxon, Kim Gordon and many more. In his role as Online Editor, Robin oversaw the growth of ClashMusic.com from a start-up blog to an internationally respected website, helping run showcases at The Great Escape and SXSW, and exposing a strong social-media following to the best contemporary music. Based in London, Robin also writes for Crack, London In Stereo, The List and The Skinny, and lectures on Music Journalism at the University of Creative Arts in Epsom, Surrey.