Superheroes, Movies, and the State: How the U.S. Government Shapes Cinematic Universes (Hardcover) 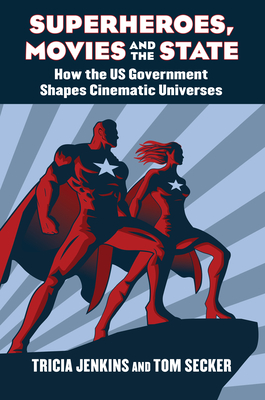 Superheroes, Movies, and the State: How the U.S. Government Shapes Cinematic Universes (Hardcover)


Not On Our Shelves—Ships in 1-5 Days
Tricia Jenkins and Tom Secker deliver a highly original exploration of how the government-entertainment complex has influenced the world's most popular movie genre--superhero films. Superheroes, Movies, and the State sets a new standard for exploring the government-Hollywood relationship as it persuasively documents the critical role different government agencies have played in shaping characters, stories, and even the ideas behind the hottest entertainment products. Jenkins and Secker cover a wide range of US government and quasi-governmental agencies who act to influence the content of superhero movies, including the Department of Defense, the National Academy of Sciences' Science and Entertainment Exchange and, to a lesser extent, the FBI and the CIA. Superheroes, Movies, and the State deploys a thematic framework to analyze how five of the key themes of our time--militarism, political radicalism and subversion, the exploration of space, the role of science and technology, and representation and identity--manifest in the superhero genre, and the role of the government in molding narratives around these topics. The book includes interviews with both producers and influencer insiders and covers a wide range of superhero products, from 1970s TV shows up to the most recent movie and TV releases, including the first major analysis of the hit Amazon show The Boys. In addition, it is the first deep exploration of NASA's Hollywood office and the first detailed account of the role of the Science and Entertainment Exchange, which has worked on thousands of products since its creation in 2008 but is little known outside of the industry. Superheroes, Movies, and the State offers an innovative blend of research methods and interpretive frameworks, combining both production histories and deep readings of superhero texts to clearly reveal how the government-entertainment complex works in the world of blockbuster cinema to shape public perceptions of the United States, war, science, and much, much more.