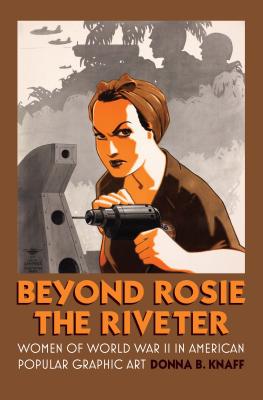 By Donna B. Knaff


Special Order—Subject to Availability
The iconic bicep-flexing poster image of Rosie the Riveter has long conveyed the impression that women were welcomed into the World War II work force and admired for helping free a man to fight. Donna Knaff, however, shows that Rosie only revealed part of the reality and that women depicted in other World War II visual art--both in the private sector and the military--reflected decidedly mixed feelings about the status of women within American society. Beyond Rosie the Riveter takes readers back to a time before television's dominance, to the golden age of print art and its singular power over public opinion. Focusing specifically on instances of female masculinity when women entered previously all-male fields, Knaff places these images within the context of popular discussions of gender roles and examines their historical, cultural, and textual contexts. As Knaff reveals, visual messages received by women through war posters, magazine cartoons, comic strips, and ads may have acknowledged their importance to the war effort but also cautioned them against taking too many liberties or losing their femininity. Her study examines the subtle and not-so subtle cultural battles that played out in these popular images, opening a new window on American women's experience. Some images implicitly argued that women should maintain their femininity despite adopting masculinity for the war effort; others dealt with society's deep-seated fear that masculinized women might feminize men; and many reflected the dilemma that a woman was both encouraged to express and suppress her sexuality so that she might be perceived as neither promiscuous nor lesbian. From these cases, Knaff draws a common theme: while being outwardly empowered or celebrated for their wartime contributions, women were kept in check by being held responsible for everything from distracting male co-workers to compromising machinery with their long hair and jewelry. Knaff also notes the subtle distinctions among the images: government war posters targeted blue-collar women, New Yorker content was aimed at socialites, Collier's addressed middle-class women, and Wonder Woman was geared to young girls. Especially through its focus on visual arts, Knaff's book gives us a new look at American society decades before the modern women's rights movement, torn between wartime needs and antiquated gender roles. It provides much-needed nuance to a glossed-over chapter in our history, charting the difficult negotiations that granted--and ultimately took back--American women's wartime freedoms.