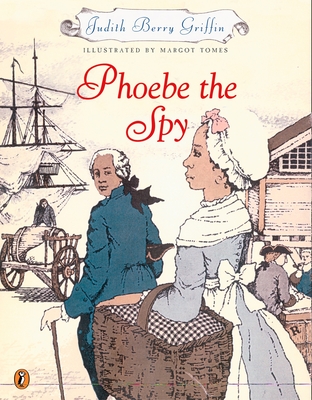 
Not On Our Shelves—Ships in 1-5 Days
Someone is planning to kill George Washington, and young Phoebe Fraunces is trying to save his life. Phoebe gets a job as George Washington's housekeeper, but her real job is to work as a spy. She listens and watches very carefully, and she meets her father every day to tell him what she has learned. One day Phoebe's father tells her that Washington is planning to leave town in a few days, and the person plotting against him will act before then. Phoebe is very frightened, but she is determined to figure out who is after Washington before it's too late. . . .

"This episode drawn from the Revolutionary War is related with historical accuracy and suspense and illustrated with finesse."(School Library Journal)
Judith Griffin is an author of children’s books. Her work includes Phoebe the General and Phoebe the Spy, both published by Penguin Random House.

Margot Tomes was an American artist and children’s book illustrator, whose work has appeared in Newbery Honor books as well as New York Times Children’s Books of the Year. Her books illustrated for Penguin Random House include Phoebe the Sky; Anna, Grandpa, and the Big Storm; and What’s the Big Idea, Ben Franklin?