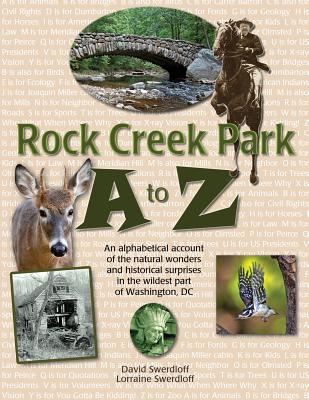 Illustrated with more than 250 images, Rock Creek Park A to Z entertains as it answers questions that arise with every twist and turn of the valley and every entry from A to Z:

The alphabetical account begins with A is for Animals...from the newly-arrived coyotes to non-native black squirrels introduced more than a century ago.
Along the way, F is for Fords...where horses--and until 1994, autos--would splash through the creek.
N is for Neighbor...describing how the Park and the population around it affect each other for better and for worse.
Q is for Quotations...what naturalists, poets, politicians and songwriters have to say about Rock Creek Park.
U is for US Presidents...including hiking, rock-climbing, skinny-dipping and trespassing Teddy Roosevelt.
Y is for You Gotta Be Kidding...a rundown of serious proposals that, happily, were never enacted--like damming the creek to turn the valley into a vast reservoir.
And anyone who has visited Washington's lions and tigers and (panda) bears--oh my --knows that Z is for Zoo.
Get the most out of one of America's pioneering urban parks--established in 1890, at a time when America had only two other National Parks. Learn about it from A to Z.
Rock Creek Park...it's where Washington insiders go when they go outside