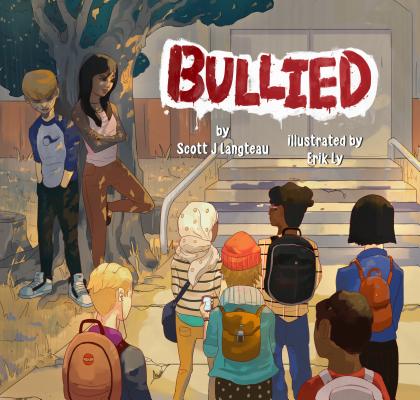 
Special Order—Subject to Availability
Written by veteran Video Game Producer and bullying survivor Scott Langteau, Bullied is a modern-day inspired anti-bullying picture book that casts light on a route to self-acceptance and empowerment. Bullied follows the day-to-day struggles of 7 young targets of aggression along with their tormentors from adolescence to adulthood. Through the journey of this book the reader discovers that accepting and staying true to oneself and examining one's behavior and its motivations serve as powerful and empowering messages for both the bullied, and bully alike. For ages 8-12.
SCOTT LANGTEAU (Author): Growing up in the small town of Seymour Wisconsin, playtime came ready-made with Scott's 11 brothers and sisters. No lie! Having fun then meant grabbing a sibling, heading outside and imagining a world around you. That imagination brought Scott Theater degrees from the University of Wisconsin - Stevens Point and Villanova University before bringing him to L.A. where he's worked as a producer, writer, and actor for over 20 years. Best known for his work on the highly acclaimed "Medal of Honor" & "Call of Duty" video game franchises, Scott has done work for companies including Disney, Pixar, DreamWorks, EA Games, and the Jim Henson Company. ERIK LY (Illustrator): Erik Ly is a contemporary illustrator from Los Angeles, CA. If he's not drawing or tabling at conventions, you can probably catch him watching reruns of Seinfeld or creating yet another playlist on iTunes. He also loves sushi and has an unhealthy obsession with wasabi.