Syrian Requiem: The Civil War and Its Aftermath (Paperback) 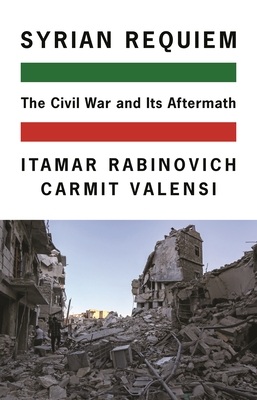 Syrian Requiem: The Civil War and Its Aftermath (Paperback)

A compact, incisive history of a war that was an ominous prelude to Russia's invasion of Ukraine

Leaving almost half a million dead and displacing an estimated twelve million people, the Syrian Civil War is a humanitarian catastrophe of unimaginable scale. Syrian Requiem analyzes the causes and course of this bitter conflict--from its first spark in a peaceful Arab Spring protest to the tenuous victory of the Asad dictatorship--and traces how the fighting has reduced Syria to a crisis-ridden vassal state with little prospect of political reform, national reconciliation, or economic reconstruction. Israel's chief negotiator with Syria during the mid-1990s, Itamar Rabinovich brings unmatched expertise and insight to the politics of the Middle East. Drawing on more than two hundred specially conducted interviews with key players, Rabinovich and Carmit Valensi assess the roles of local, regional, and global interests in the war. Local sectarian divisions established the fault lines of the initial conflict, ultimately leading to the rise of the brutal Islamic State. However, Syria rapidly became the stage for proxy warfare between contending regional powers, including Israel, Turkey, and Iran. At the same time, while a war-weary United States attempted to reduce its military involvement in the Middle East, a resurgent Russia regained regional influence by supporting Syrian government forces. Telling the story of the war and its aftermath, Rabinovich and Valensi also examine the considerable potential for renewed conflict and the difficult policy choices facing the United States, Russia, and other powers. A compact and incisive history of one of the defining wars of our times, Syrian Requiem is a vivid and timely account of a conflict that continues to reverberate today.
Itamar Rabinovich is professor and president emeritus at Tel Aviv University and vice chair of the Institute of National Security Studies in Tel Aviv. He was Israeli prime minister Yitzhak Rabin's chief negotiator with Syria and is a former Israeli ambassador to the United States. His books include Yitzhak Rabin: Soldier, Leader, Statesman and Waging Peace: Israel and the Arabs, 1948-2003 (Princeton). Twitter @ItamarRabinovi Carmit Valensi is a senior fellow and the director of the Syria research program at the Institute for National Security Studies. Twitter @CarmitValensi