The Lives of Moths: A Natural History of Our Planet's Moth Life (Hardcover) 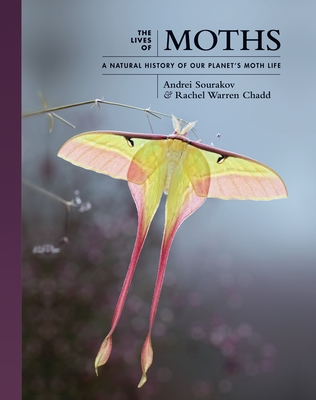 The Lives of Moths: A Natural History of Our Planet's Moth Life (Hardcover)

A richly illustrated look at the natural history of moths

Moths are among the most underappreciated insects on the planet, yet they make up the majority of some 180,000 known species of Lepidoptera. Filled with striking images, The Lives of Moths looks at the remarkable world of these amazing and beautiful creatures. While butterflies may get more press than moths, Andrei Sourakov and Rachel Warren Chadd reveal that the lopsided attention is unjust. Moths evolved long before butterflies, and their importance cannot be overestimated. From the tiniest leaf miners to exotic hawk moths that are two hundred to three hundred times larger, these creatures are often crucial pollinators of flowers, including many that bloom at night or in twilight. The authors show that moths and their larvae are the main food source for thousands of animal species, and interact with other insect, plant, and vertebrate communities in ecosystems around the world, from tropical forests and alpine meadows to deserts and wetlands. The authors also explore such topics as evolution, life cycles, methods of communication, and links to humans. A feast of remarkable facts and details, The Lives of Moths will appeal to insect lovers everywhere.
Andrei Sourakov is the collections coordinator for the McGuire Center for Lepidoptera and Biodiversity at the Florida Museum of Natural History. He has been studying moths for more than forty years. Rachel Warren Chadd is a writer and editor. Her books include Birds: Myth, Lore, and Legend. Together, they previously worked on The Book of Caterpillars as contributor and editor, respectively.