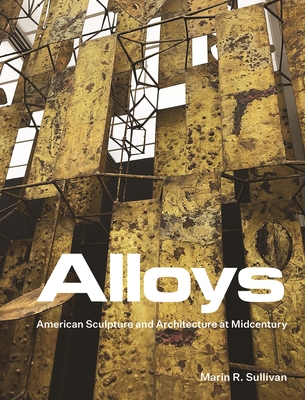 Alloys looks at a unique period of synergy and exchange in the postwar United States, when sculpture profoundly shaped architecture, and vice versa. Leading architects such as Gordon Bunshaft and Eero Saarinen turned to sculptors including Harry Bertoia, Alexander Calder, Richard Lippold, and Isamu Noguchi to produce site-determined, large-scale sculptures tailored for their buildings' highly visible and well-traversed threshold spaces. The parameters of these spaces--atriums, lobbies, plazas, and entryways--led to various designs like sculptural walls, ceilings, and screens that not only embraced new industrial materials and processes, but also demonstrated art's ability to merge with lived architectural spaces. Marin Sullivan argues that these sculptural commissions represent an alternate history of midcentury American art. Rather than singular masterworks by lone geniuses, some of the era's most notable spaces--Philip Johnson's Four Seasons Restaurant in Mies van der Rohe's Seagram Building, Max Abramovitz's Philharmonic Hall at Lincoln Center, and Pietro Belluschi and Walter Gropius's Pan Am Building--would be diminished without the collaborative efforts of architects and artists. At the same time, the artistic creations within these spaces could not exist anywhere else. Sullivan shows that the principle of synergy provides an ideal framework to assess this pronounced relationship between sculpture and architecture. She also explores the afterlives of these postwar commissions in the decades since their construction. A fresh consideration of sculpture's relationship to architectural design and functionality following World War II, Alloys highlights the affinities between the two fields and the ways their connections remain with us today.