Until We Have Won Our Liberty: South Africa After Apartheid (Hardcover) 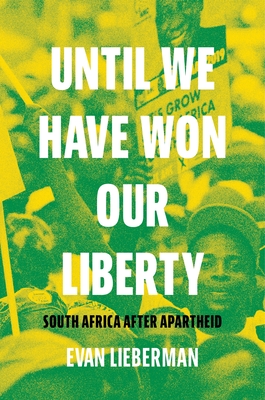 Until We Have Won Our Liberty: South Africa After Apartheid (Hardcover)

At a time when many democracies are under strain around the world, Until We Have Won Our Liberty shines new light on the signal achievements of one of the contemporary era's most closely watched transitions away from minority rule. South Africa's democratic development has been messy, fiercely contested, and sometimes violent. But as Evan Lieberman argues, it has also offered a voice to the voiceless, unprecedented levels of government accountability, and tangible improvements in quality of life. Lieberman opens with a first-hand account of the hard-fought 2019 national election, and how it played out in Mogale City, a post-Apartheid municipality created from Black African townships and White Afrikaner suburbs. From this launching point, he examines the complexities of South Africa's multiracial society and the unprecedented democratic experiment that began with the election of Nelson Mandela in 1994. While acknowledging the enormous challenges many South Africans continue to face--including unemployment, inequality, and discrimination--Lieberman draws on the country's history and the experience of comparable countries to demonstrate that elected Black-led governments have, without resorting to political extremism, improved the lives of millions. In the context of open and competitive politics, citizens have gained access to housing, basic services, and dignified treatment to a greater extent than during any prior period. Countering much of the conventional wisdom about contemporary South Africa, Until We Have Won Our Liberty offers hope for the enduring impact of democratic ideals.
Evan Lieberman is the Total Professor of Political Science and Contemporary Africa at the Massachusetts Institute of Technology. He is the author of Boundaries of Contagion: How Ethnic Politics Have Shaped Government Responses to AIDS (Princeton) and Race and Regionalism in the Politics of Taxation in Brazil and South Africa. Twitter @evlieb