Structuring the State: The Formation of Italy and Germany and the Puzzle of Federalism (Paperback) 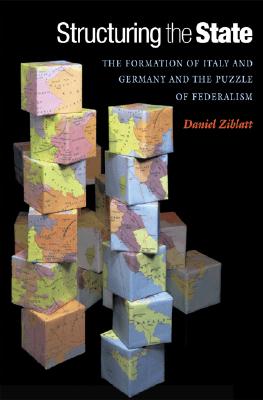 Structuring the State: The Formation of Italy and Germany and the Puzzle of Federalism (Paperback)

Germany's and Italy's belated national unifications continue to loom large in contemporary debates. Often regarded as Europe's paradigmatic instances of failed modernization, the two countries form the basis of many of our most prized theories of social science. Structuring the State undertakes one of the first systematic comparisons of the two cases, putting the origins of these nation-states and the nature of European political development in new light.

Daniel Ziblatt begins his analysis with a striking puzzle: Upon national unification, why was Germany formed as a federal nation-state and Italy as a unitary nation-state? He traces the diplomatic maneuverings and high political drama of national unification in nineteenth-century Germany and Italy to refute the widely accepted notion that the two states' structure stemmed exclusively from Machiavellian farsightedness on the part of militarily powerful political leaders. Instead, he demonstrates that Germany's and Italy's "founding fathers" were constrained by two very different pre-unification patterns of institutional development. In Germany, a legacy of well-developed sub-national institutions provided the key building blocks of federalism. In Italy, these institutions' absence doomed federalism. This crucial difference in the organization of local power still shapes debates about federalism in Italy and Germany today. By exposing the source of this enduring contrast, Structuring the State offers a broader theory of federalism's origins that will interest scholars and students of comparative politics, state-building, international relations, and European political history.
Daniel Ziblatt is associate professor of government and social studies at Harvard University, where he is also faculty associate at the Minda de Gunzburg Center for European Studies.