Apocalypse: Earthquakes, Archaeology, and the Wrath of God (Hardcover) 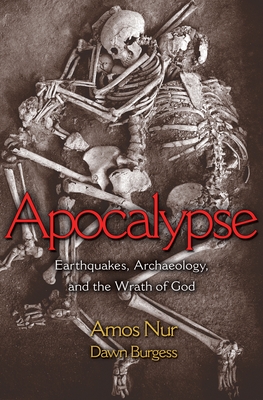 Apocalypse: Earthquakes, Archaeology, and the Wrath of God (Hardcover)

What if Troy was not destroyed in the epic battle immortalized by Homer? What if many legendary cities of the ancient world did not meet their ends through war and conquest as archaeologists and historians believe, but in fact were laid waste by a force of nature so catastrophic that religions and legends describe it as the wrath of god? Apocalypse brings the latest scientific evidence to bear on biblical accounts, mythology, and the archaeological record to explore how ancient and modern earthquakes have shaped history--and, for some civilizations, seemingly heralded the end of the world.

Archaeologists are trained to seek human causes behind the ruins they study. Because of this, the subtle clues that indicate earthquake damage are often overlooked or even ignored. Amos Nur bridges the gap that for too long has separated archaeology and seismology. He examines tantalizing evidence of earthquakes at some of the world's most famous archaeological sites in the Mediterranean and elsewhere, including Troy, Jericho, Knossos, Mycenae, Armageddon, Teotihuac n, and Petra. He reveals what the Bible, the Iliad, and other writings can tell us about the seismic calamities that may have rocked the ancient world. He even explores how earthquakes may have helped preserve the Dead Sea Scrolls. As Nur shows, recognizing earthquake damage in the shifted foundations and toppled arches of historic ruins is vital today because the scientific record of world earthquake risks is still incomplete. Apocalypse explains where and why ancient earthquakes struck--and could strike again.
Amos Nur is the Wayne Loel Professor of Earth Sciences and professor of geophysics at Stanford University. Dawn Burgess is a writer and editor based in Bar Harbor, Maine. She earned a PhD in geophysics from Stanford.