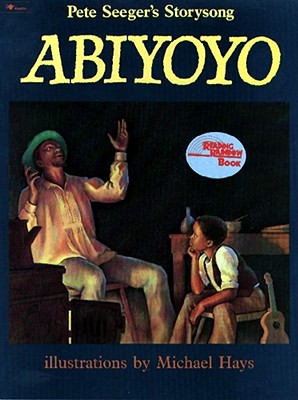 
In Stock—Click for Locations
A young boy and his father save the town that ostracized them from a hungry giant in this picture book adaptation of a South African lullaby and folk story.

In a small town, one young boy loves walking around playing the ukulele, but the people get tired of the clink, clunk, clonk and beg him to stop while covering their ears! The boy’s father has a magic wand he uses to make things disappear, like a playing card or a glass of water—or a chair just as someone’s about to sit.

The townspeople have had quite enough of the boy’s noise and the father’s tricks and drive them from the town. But then the giant called Abiyoyo comes to town and starts gobbling up everything in sight. If they work together, can the magician and his son make this very big problem disappear?
Pete Seeger is a national treasure, arguably the most influential figure in American folk music as well as an important advocate of social causes. He lives in Beacon, New York.

Michael Hays has illustrated several picture books, including the sequel to Abiyoyo, Abiyoyo Returns. He lives in Chicago, Illinois.