King of the Playground (Paperback) 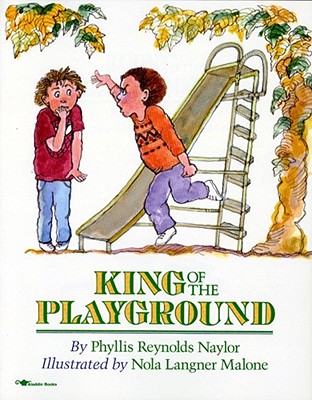 King of the Playground (Paperback)


Special Order—Subject to Availability
Kevin loves to go to the playground, but not when Sammy is there. And Sammy, who boasts that he is King of the Playground, is there most of the time. If he catches Kevin on the swings or the slide or the monkey bars, Sammy says, he will do awful, terrible things to him. Kevin tells his dad what Sammy says and they talk it over.
And then one day Kevin gets his courage up and goes to the playground even though Sammy says he can't come in. Even though Sammy tells him to go home. Even though Sammy says he will put Kevin in a cage with bears in it.
Will Kevin stay, or will he go home? How will he deal with Sammy?
Phyllis Reynolds Naylor has written more than 135 books, including the Newbery Award–winning Shiloh and its sequels, the Alice series, Roxie and the Hooligans, and Roxie and the Hooligans at Buzzard’s Roost. She lives in Gaithersburg, Maryland. To hear from Phyllis and find out more about Alice, visit AliceMcKinley.com.