When Pride Still Mattered: A Life Of Vince Lombardi (Paperback) 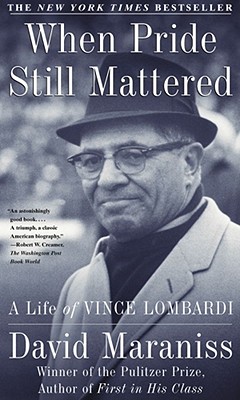 When Pride Still Mattered: A Life Of Vince Lombardi (Paperback)


Not On Our Shelves—Ships in 1-5 Days
In this groundbreaking biography, David Maraniss captures all of football great Vince Lombardi: the myth, the man, his game, and his God.

More than any other sports figure, Vince Lombardi transformed football into a metaphor of the American experience. The son of an Italian immigrant butcher, Lombardi toiled for twenty frustrating years as a high school coach and then as an assistant at Fordham, West Point, and the New York Giants before his big break came at age forty-six with the chance to coach a struggling team in snowbound Wisconsin. His leadership of the Green Bay Packers to five world championships in nine seasons is the most storied period in NFL history. Lombardi became a living legend, a symbol to many of leadership, discipline, perseverance, and teamwork, and to others of an obsession with winning. In When Pride Still Mattered, Pulitzer Prize-winning author David Maraniss captures the myth and the man, football, God, and country in a thrilling biography destined to become an American classic.
David Maraniss is an associate editor at The Washington Post and a distinguished visiting professor at Vanderbilt University. He has won two Pulitzer Prizes for journalism and was a finalist three other times. Among his bestselling books are biographies of Bill Clinton, Barack Obama, Roberto Clemente, and Vince Lombardi, and a trilogy about the 1960s—Rome 1960; Once in a Great City (winner of the RFK Book Prize); and They Marched into Sunlight (winner of the J. Anthony Lucas Prize and Pulitzer Finalist in History).
"An astonishingly good book. . . . A triumph, a classic American biography."
— Robert W. Creamer

"Forges a near-perfect synthesis of fine writing and fascinating material. May be the best sports biography ever published."
— Ron Fimrite

"A superb book, one of the best on football that we have."
— Michael Oriard

"A masterly biography. . . . A finely crafted, multifaceted portrait of a life driven by obsession."
— Tim Long

"Both the reach of the research and the grasp of Lombardi's character are impressive. It is a wonderful work."
— Lester Munson

"It is simply a superb biography."
— Bill Brashler