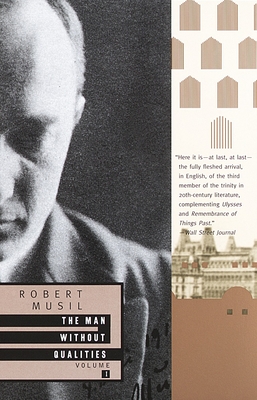 This is book number 1 in the Vintage International series.

Set in Vienna on the eve of World War I, this great novel of ideas tells the story of Ulrich, ex-soldier and scientist, seducer and skeptic, who finds himself drafted into the grandiose plans for the 70th jubilee of the Emperor Franz Josef. This new translation--published in two elegant volumes--is the first to present Musil's complete text, including material that remained unpublished during his lifetime.
Robert Musil was born in 1880 in Austria and studied at the military college in Vienna and undertook an engineering degree in Brno, Czechoslovakia, before turning to psychology and philosophy doctoral studies in Berlin, where he began to write. He married Martha Marcovaldi in 1911. He fought in World War I, where he befriended Franz Kafka in Prague. Following the war, Musil returned to a literary career in Vienna and Berlin, during which time he was nominated for the Nobel Prize. He was the author of Five Women, The Posthumous Papers of a Living Author, and The Confusions of Young Torless. His works were banned by the Nazis, and he and his Jewish wife went into exile during World War II. He died of a stroke in 1942. Musil's works began to reappear in the 1950s, and his unfinished The Man Without Qualities is generally considered to be one of the most important modernist novels.