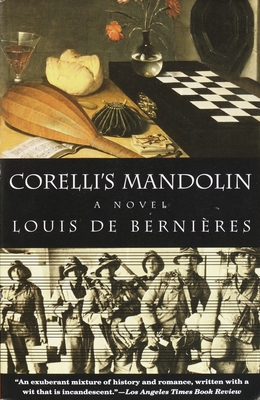 
In Stock—Click for Locations
The acclaimed story of a timeless place that one day wakes up to find itself in the jaws of history: "An exuberant mixture of history and romance, written with a wit that is incandescent" (Los Angeles Times Book Review).

The place is the Greek island of Cephallonia, where gods once dabbled in the affairs of men and the local saint periodically rises from his sarcophagus to cure the mad. Then the tide of World War II rolls onto the island's shores in the form of the conquering Italian army.

Caught in the occupation are Pelagia, a willful, beautiful young woman, and the two suitors vying for her love: Mandras, a gentle fisherman turned ruthless guerilla, and the charming, mandolin-playing Captain Corelli, a reluctant officer of the Italian garrison on the island. Rich with loyalties and betrayals, and set against a landscape where the factual blends seamlessly with the fantastic, Corelli's Mandolin is a passionate novel as rich in ideas as it is genuinely moving.
Louis de Bernieres' novels include The War of Don Emmanuel's Nether Parts (Commonwealth Writers Prize, Best First Book Eurasia Region, 1991), Senor Vivo and the Coca Lord (Commonwealth Writers Prize, Best Book Eurasia Region, 1992), and The Troublesome Offspring of Cardinal Guzman. The author, who lives in London, was selected as one of the twenty Best of Young British Novelists 1993.
"Brims with all the grand topics of literature--love and death, heroism and skull-duggery, humor and pathos, not to mention art and religion. . . . A good old-fashioned novel." --Washington Post Book World

"An exuberant mixture of history and romance, written with a wit that is incandescent"--Los Angeles Times Book Review