Playing In The Dark: Whiteness and the Literary Imagination (Paperback) 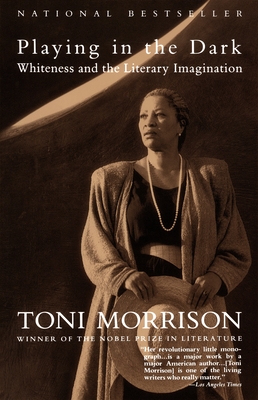 Playing In The Dark: Whiteness and the Literary Imagination (Paperback)

By Toni Morrison
List Price: $16.00
Our Price: $15.00
(Save: $1.00 6%)
On Our Shelves Now at:
An immensely persuasive work of literary criticism that opens a new chapter in the American dialogue on race—and promises to change the way we read American literature—from the acclaimed Nobel Prize winner

Morrison shows how much the themes of freedom and individualism, manhood and innocence, depended on the existence of a black population that was manifestly unfree--and that came to serve white authors as embodiments of their own fears and desires. According to the Chicago Tribune, Morrison "reimagines and remaps the possibility of America." Her brilliant discussions of the "Africanist" presence in the fiction of Poe, Melville, Cather, and Hemingway leads to a dramatic reappraisal of the essential characteristics of our literary tradition.

Written with the artistic vision that has earned the Nobel Prize-winning author a pre-eminent place in modern letters, Playing in the Dark is an invaluable read for avid Morrison admirers as well as students, critics, and scholars of American literature.
Toni Morrison is the author of eleven novels, from The Bluest Eye (1970) to God Help the Child (2015). She received the National Book Critics Circle Award, the Pulitzer Prize, and in 1993 she was awarded the Nobel Prize in Literature. She died in 2019.
"A profound redefinition of American cultural identity."--Philadelphia Inquirer

"By going for the American literary jugular...she places her arguments...at the very heart of contemporary public conversation about what it is to be authentically and originally American. [She] boldly...reimagines and remaps the possibility of America." --Chicago Tribune

"Toni Morrison is the closest thing the country has to a national writer." --The New York Times Book Review