The Best of Roald Dahl (Paperback) 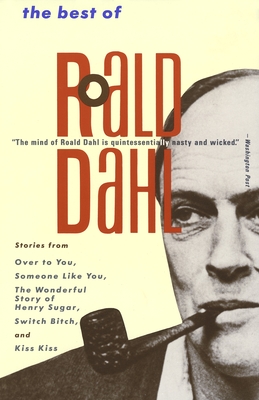 The Best of Roald Dahl (Paperback)


Special Order—Subject to Availability
If Stephen King could write with murderous concision, he might have come up with "The Landlady," the story of a boarding house with an oddly talented proprietress and a small but permanent clientele. If Clive Barker had a sense of humor, he might have written "Pig," a brutally funny look at cooks and vegetarianism. And a more bloodthirsty Jorge Luis Borges might have imagined the fanatical little gambler in "Man From the South," who does his betting with a hammer, nails, and a butcher knife.

But all these stories in this volume were written by Roald Dahl, whose genius for the horrific and grotesque is unparalleled and entirely his own.

"Dahl has the mastery of plot and characters possessed by great writers of the past, along with a wildness and wryness of his own. One of his trademarks is writing beautifully about the ugly, even the horrible."--Los Angeles Times

"An ingenious imagination, a fascination with odd and ordinary detail, and a lust for its thorough exploitation are the...strengths of Dahl's storytelling."--New York Times Book Review
Roald Dahl (1916-1990) was born in Llandaff, South Wales, and went to Repton School in England. His parents were Norwegian, so holidays were spent in Norway. As he explains in Boy, he turned down the idea of university in favor of a job that would take him to 'a wonderful faraway place'. In 1933 he joined the Shell Company, which sent him to Mombasa in East Africa. When World War II began in 1939 he became a fighter pilot and in 1942 was made assistant air attaché in Washington, where he started to write short stories. His first major success as a writer for children was in 1964. Thereafter his children's books brought him increasing popularity, and when he died children mourned the world over, particularly in Britain where he had lived for many years.